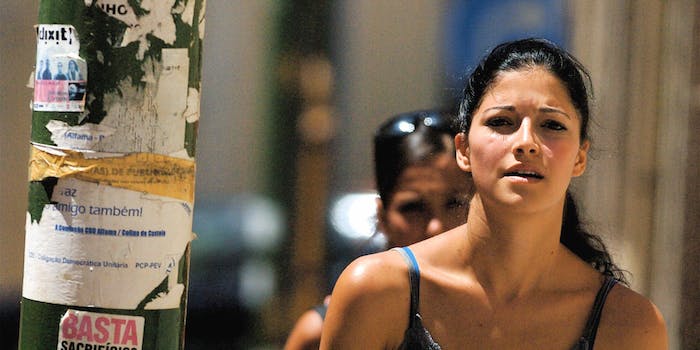 What the responses to that viral catcalling video get wrong

This is how we trivialize harassment.

The reactions to “10 Hours of Walking in NYC as a Woman,” the recent viral video from the anti-street-harassment group Hollaback, have run the gamut from angry and mocking to inspired and supportive, and some are fascinating. In case you missed the video, which has received almost 37 million views since it was posted to YouTube on Oct. 28, it shows a woman walking through various New York City neighborhoods while enduring constant attempts by men to get her attention by making various comments, documenting “100+ instances of verbal street harassment.” It has spawned a slew of parody videos as well as countless vlog and blog responses.

The video was rightly criticized for showing mostly men of color harassing the woman, many of them sitting in chairs on the street as if they have nothing to do but harass women. (Hollaback later apologized for editing out many of the white men who’d engaged in the same behavior, calling it “unintended racial bias.”)

Some women on YouTube responded that most of what Hollaback viewed as harassment they themselves viewed as compliments, like “Nice!” and “Hey, beautiful!” or as benign greetings, such as “Have a good morning.” One parody video trivialized the Hollaback video by showing a straight male model in a tight T-shirt walking for three hours, getting catcalls from both women and men, smiling and clearly not seeing any of this as harassment.

A popular YouTube prankster then made what seemed like an earnest attempt to expose homophobia on the streets of New York by walking for three hours “as a homosexual”—in orange pants and holding a Victoria’s Secret bag—and was called a “faggot” quite a few times, logging “50+ instances of verbal harassment.”

Many of the responses, however, didn’t get the point that context and history matter. When straight men are “complimenting” women on their bodies while they’re walking down the street, or throwing homophobic slurs at gay men doing the same thing, it represents a potential threat of violence in a way that a woman or a gay man “complimenting” a straight man walking down the street simply doesn’t, because the latter doesn’t carry a history of women raping men or of gay men “straight-bashing” heterosexual men.

That important fact was completely lost in the angrier response videos by straight men, some of which went viral, like this one, in which women are told that by wearing tight jeans they are simply inviting men to comment and should stop whining and enjoy what they’re asking for.

One man compares the Hollaback video with another spin-off, “10 Hours of Walking in NYC as a Woman in Hijab” and concludes that since the woman in hijab received no catcalls, this is all simply about how women dress. If women don’t want catcalls, he reasons, they should just dress “modestly,” even joking that they should don burqas. “You’re not expecting for men, which are hardwired, to notice these things?” he asks rhetorically. The implication, of course, is that men are so “hardwired” this way that they can’t help but verbalize what they “notice.”

But if catcalling is just about how men are “hardwired” and, therefore, should be accepted, surely straight men should have no problem with gay men paying them compliments on their bodies and offering greetings on the street, right? Wrong. I don’t even have to make the video to know what would happen if I walked the city for even one hour telling straight men that they’re hot while smiling and greeting them.

Imagine that I walked the city—and, to avoid the sort of criticism that the Hollaback video received, let’s choose the whitest neighborhoods—saying to random straight men what men say to the woman in the Hollaback video: “What’s up, beautiful? Have a good day.” “Sexy.” “Hey, baby.” “Smile.” “Someone’s acknowledging you for being beautiful. You should say ‘thank you’ more.” Or even just “How are you doing today?” And let’s say I made these comments to straight men while they were in front of other straight men, their buddies or work colleagues, for example. How likely is it that I would get punched in the face, spit on, chased down the street or, at the very least, called a “faggot” or a “queer?” Even many straight men who wouldn’t react violently or hurl a slur—which, I want to believe, would be most—would feel uncomfortable, objectified and embarrassed.

That exposes the fallacy of men who say that they’re “just being men” when greeting women on the street, and that these are simply compliments that women should accept—because they surely wouldn’t accept men “just being men” when the men in question are gay. It reveals that catcalling isn’t about giving compliments to women but about straight men retaining the privilege to demand that women pay attention to them, even if it means making women feel uncomfortable or annoyed as they’re heading to work or school, including with a comment as seemingly innocuous as “Nice!” or “Smile.” That demand is the essence of harassment.

This article originally appeared on The Huffington Post, and has been reprinted with permission.