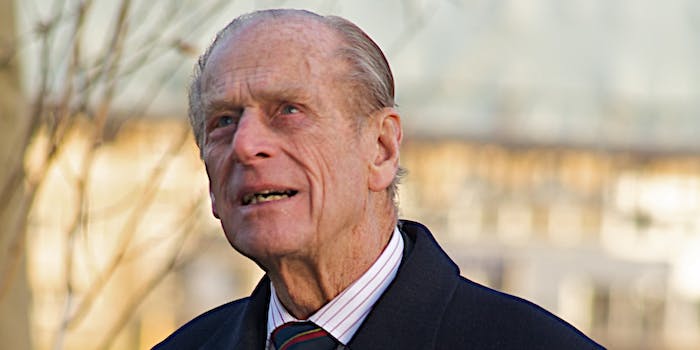 These reactions illustrate how unpopular Prince Philip really was.

Prince Philip, husband to Queen Elizabeth of the United Kingdom, passed away today. He was 99 years old, and one of the U.K.’s most well-known royals. But while most celebrity deaths are met by public mourning, Prince Philip’s controversial image is leading to widespread celebration of the news. In fact, social media is now full of memes mocking the prince’s legacy and joking about his death.

Prince Philip was a WWII veteran with a long-established impact in British society, holding a diplomatic position as a public-facing royal. But for the most part, he’s infamous for making virulently racist and otherwise offensive statements. Even among fans of the royal family, he was a rather unpopular figure. And for people who oppose the monarchy, he represents everything bad about British imperial patriotism and the institute of royalty itself. That explains why Twitter is now full of reactions like this:

Prince Philip has long held a divisive place in British society, but in recent years his image suffered further for two reasons: Netflix’s The Crown, and the ongoing scandals around Prince Harry and Meghan Markle, who left the royal family due to racist harassment and allegedly abusive treatment behind the scenes. Depicting the personal lives of Queen Elizabeth and her family, The Crown portrays Philip in a negative light, especially as a husband. It shines a light on dark moments in the royal family’s history, reviving scandals that weren’t known by younger viewers. And in real life, Prince Philip was widely perceived as one of the key villains in the public narrative of Meghan and Harry, tying into his racist reputation.

If you’re not familiar with the politics surrounding the British royal family and what they represent, these reactions may seem shockingly callous. But Prince Philip’s unpopularity really can’t be underestimated.