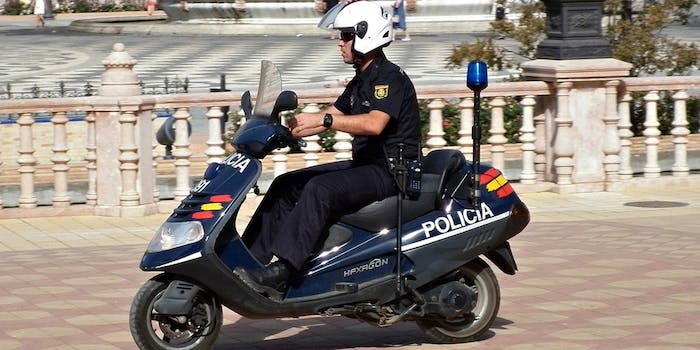 Spanish police have figured out how to get the public on their side: make them laugh.

Spanish police have figured out how to get the public on their side: make them laugh.

A lighthearted Twitter account run by the national force is about to hit 500,000 followers. It’s helped the force make more than 300 drug-related arrests in the last year. It gets across serious messages in a way that speaks to citizens’ funny bones.

“Ah, a few beers on a terrace laughing with your girlfriends, watching the hot boys go past ;) Don’t take your eye off your handbag and your phone,” one reads.

An ex-journalist is behind @policia‘s tweets, and Carlos Fernandez Guerra told Reuters he was not concerned about those who think the account is too humorous.

“We use language that is attention-grabbing, related to things that are being tweeted at the moment,” Fernandez said, ignoring concerns from other members of the force that the account should not take a less serious approach to matters like scams and teens sexting nude photos (which can be classed as child pornography).

“We are focused on the average citizen and what they will like,” he said.

While police monitor around 1,200 mentions a day and keep an eye on it for about 17 hours each day, they don’t want people reporting emergency situations via tweets. That’s what emergency numbers are for.

However, they’re happy to receive tips on criminal activity. Fernandez told Reuters that beyond the 300 drug arrests, one criminal turned himself in after police tweeted about him and cops were able to locate a fugitive after 5,000 people retweeted a note that police were hunting him. He noted that Latin American forces are adopting Spain’s Twitter outreach strategy.

Perhaps the model will work elsewhere and in other ways too. We wonder if Homeland Security will be encouraging people to make as many calls as they can with a knowing, jokey tweet in the near future.

There’s been some dissent in the Daily Dot newsroom over which police force really is the funniest. The Seattle Police Department makes a strong case: