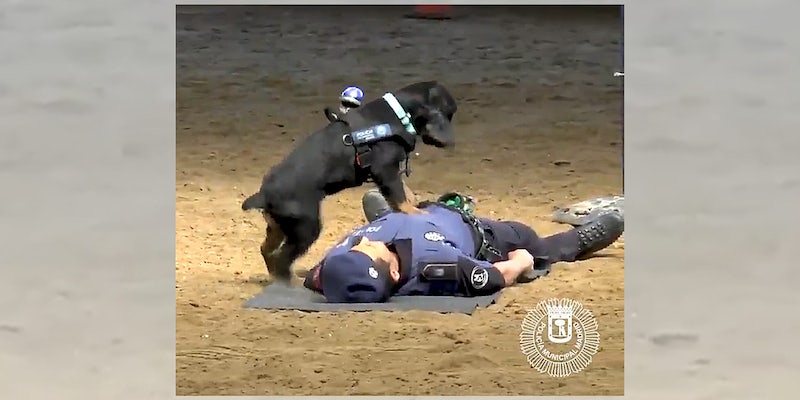 If you need CPR, this adorable dog just might save your life.

A heroic performance by Poncho the police dog has been inspiring people all over the world since it was posted to Twitter on Friday, June 22.

Poncho is part of the police force in Madrid, Spain, and he has apparently learned to perform CPR. In the video below, this very good boy can be seen “rescuing” his trainer, who appears to faint in a simulated exercise to show off Poncho’s skills.

“‘Heroic’ performance of our #Compañerosde4Patas [four legged classmate] Poncho,” the police department said in a Tweet that accompanied the video, “who did not hesitate for a moment to ‘save the life’ of the agent, practicing the #CPR in a masterful way.” [Translated from Spanish]

Why do I stay on twitter despite the agression, gloom, doom and general crap?

Because of this. A Madrid police dog trained in CPR. That’s all I need.

*look at him checking for breathing. It’s amazing* https://t.co/HSB8Bf0hmJ

Definitely worth faking your own death for this. https://t.co/jXKZGEj3tO

I AM GOING TO SPAIN AND HAVING A HEART ATTACK RIGHT NOW https://t.co/H2VpwAZ3At

Often CPR, short for cardiopulmonary resuscitation, is accompanied by mouth-to-mouth resuscitation, especially in adults, but Poncho decided to spare his trainer that part of the procedure. It’s also hard to tell if Poncho’s jumps are enough to compress the man’s chest the recommended two inches deep, but what’s undeniable is that Poncho is certainly giving it his all, and isn’t that what makes a true hero?