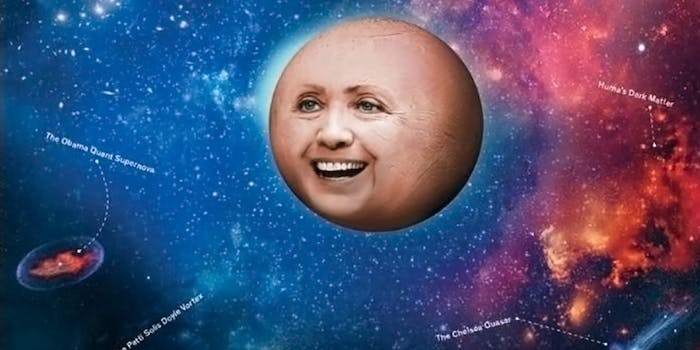 And yet it feels we've only scratched the surface.

Did the art editors at New York Times Magazine know that their unreal “Planet Hillary” cover was a Photoshop comedian’s dream come true? Because it really seems that way.

take me to your planet @DPD_ pic.twitter.com/wyqJpd4t7X

A meme that would pair nicely with other memes, too—and not just Hillary-based ones.

There were some other pop-cultural comparisons.

So… did that Planet Hillary NYT Mag cover make anyone else think of Doctor Who’s Cassandra? cc: @TwitchyTeam pic.twitter.com/BXKFL9xNqA

Oh no! What happened on Planet Hillary? pic.twitter.com/FHQgcdd6F5

Submitted for re-approval: A mashup of all photos on my timeline today. cc: @BriTheWebGuy pic.twitter.com/0hxxvNoo1s

And the meme-ification begins RT @christofear Miley and Hillary on NYT Mag cover. how weird pic.twitter.com/ka8qwmfY1F

Did anyone do this yet? You’re welcome. #planetdoge #hillary @nytimes pic.twitter.com/LQdq0InBJN

Poor Hillary Clinton. Does she truly deserve to be lumped in with these other disgraceful stories, just because she’s had her face digitally altered into a celestial sphere? Of course not—but that doesn’t mean we’ll ever stop laughing.