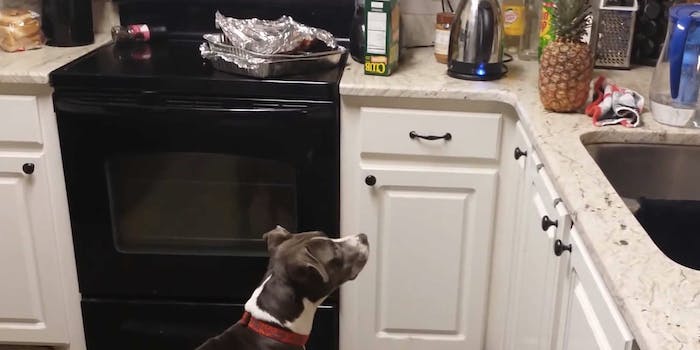 Watch a pit bull lose a stare-down with a pinapple

Stella's not taking any chances with that thing.

Pineapples are considered symbols of hospitality and welcome, but a pit bull named Stella doesn’t trust them in the slightest, and all the cajoling in the world won’t change her mind.

Can she bark the spiny, exotic fruit into submission? Hey, it’s worth a shot. In the end, however, her wariness of the unknown food proves too great—the kitchen, it seems, is lost.

According to the video’s uploader, Jolene Creighton, she eventually did get over her fear, with a little help from her friend.

“I had to call my other dog over (Guinness) and let him sniff the pineapple before Stella would even go near it,” Creighton wrote. “My other dog, if you are wondering, is an 18 pound miniature pinscher mix. Stella is about 50 pounds…she is not terribly brave.”

We can understand the trepidation. It must have been a brave human indeed who first tried to eat one of these things.