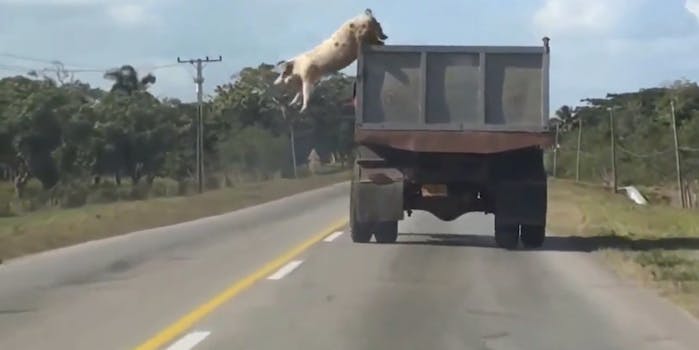 One pig will not be resigned to its fate.

One pig will not be resigned to its fate.

The motorists who captured the feat somewhere in South America were driving behind a truck, presumably en route to a slaughterhouse, when the pig decided to make that final leap to freedom instead of becoming somebody’s strip of bacon.

Do we have a pork Chicken Run on our hands? How aware do we think these pigs actually are to their short lives of being fattened up only to end up on a human’s breakfast or dinner plate? Or was it just dumb luck?

We can only guess what happened to the pig, but let’s hope it’s not so bitter as to start its own version of Animal Farm. That whole “all animals are equal, but some animals are more equal than others” ideology didn’t really work well for anyone involved.