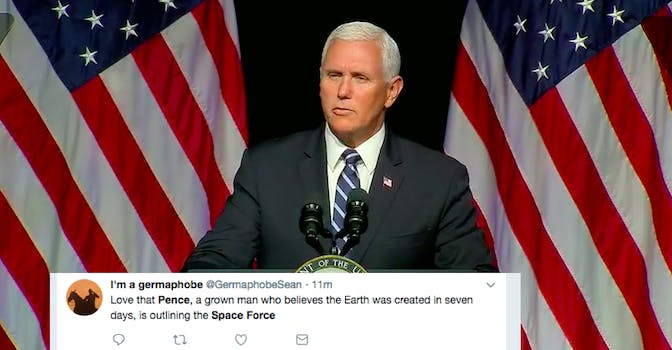 Just what we need: A space military.

Last month, President Donald Trump made an offhand remark that he wanted to militarize the infinite beyond with a Space Force, because one of the best ways to ensure re-election is to endlessly feed the military-industrial complex.

With his trademarked clenched grimace, Pence boldly proclaimed America was going to sink money into things that aren’t low-income housing, assistance for the working poor, healthcare, or infrastructure.

After his big, bold announcement, no one clapped.

Pence said that Trump’s plan to laser fight the galaxy was the surest way to interstellar peace.

America will always seek peace, in space as on the Earth. But history proves that peace only comes through strength. And in the realm of outer space, the United States #SpaceForce will be that strength. pic.twitter.com/I39E00oK60

Yes, preparing for war has always brought about… not war. In his speech, Pence even called space a “war-fighting domain.”

.@POTUS’ highest priority is the safety & security of the American people. And while too often previous administrations all but neglected the growing security threats emerging in space, @POTUS stated clearly that space is “a war-fighting domain, just like the land, air & sea." pic.twitter.com/t6UunHsaYr

Trump’s plan is to establish Space Force as a sixth branch of the military by 2020, and after Pence’s speech, the president chimed in with this tweet.

Outside of the industries that are slated to profit tremendously from a space military, no one else thought this was a good idea.

I can't even stand the stupidity of this, holy shit. https://t.co/tcV8MyhM23

Have any alien civilizations been asked to pay for it already?

astronaut with a glock drifting through space shooting at the moon https://t.co/AXAy1Y2atS

Despite Pence’s and Trump’s confidence and bravado in announcing Space Force, Congress still needs to allocate funds for it, which seems unlikely.

Anyway, if you are one of those people who believes we are living in the dumbest timeline, well:

Love that Pence, a grown man who believes the Earth was created in seven days, is outlining the Space Force

But it raises a question: Which side will Pence choose when Trump invades heaven?

The Daily Dot has reached out to Pence’s people for a response.