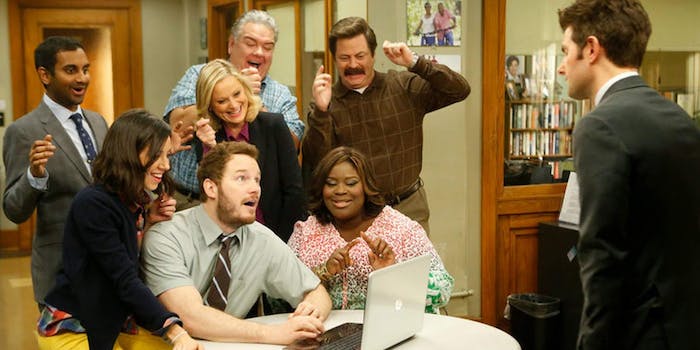 How ‘Parks and Recreation’ made the world a better place

In an increasingly cynical America, 'Parks and Rec' dared to hope.

Let it never be said that just because something isn’t popular, it isn’t also great.

This was the ethos that defined both the fictional narrative of the show and the real life narrative surrounding the run of NBC’s Parks and Recreation. On the bubble for seven seasons, Parks never did well in the ratings; though it eventually became a critical darling, the show was never a big awards contender either, only getting nominated for the Outstanding Comedy Series Emmy once. The show also earned just one Golden Globe, which went to Amy Poehler in 2014 (she took home a shockingly overdue statue for her performance as Leslie Knope).

What makes this lack of recognition strangely fitting, however, is that Parks and Recreation has always been an underdog story at its core. With the age of the incredibly smart but little seen NBC comedy now behind us (the only one of its era still left standing is Community, which will be moving to Yahoo this March), it seems an appropriate time to celebrate the legacy of Parks and Recreation and recognize what made it such a beloved show. Because after last night’s finale, the secret to the show’s success has become immediately apparent: In an Internet-fueled, virulently fragmented political landscape, Parks and Recreation was a singularly positive piece of television.

Parks and Recreation has always been an underdog story at its core.

It’s common knowledge at this point that American politics have become overwhelmingly partisan, and former president Jimmy Carter even argued that the U.S. is more polarized now than during the Civil War. And while things may not be quite that bad, it’s increasingly hard to find issues on which we as a country can meet in the middle.

“Republicans and Democrats are more divided along ideological lines—and partisan antipathy is deeper and more extensive—than at any point in the last two decades,” declared the Pew Research Center in a report from last year. “These trends manifest themselves in myriad ways, both in politics and in everyday life. And a new survey of 10,000 adults nationwide finds that these divisions are greatest among those who are the most engaged and active in the political process.”

However, this antipathy isn’t just about right versus left. It also extends to our elected officials in a larger sense. This January marked the first time Obama’s approval ratings hit 50 percent since 2013, and Congress is literally less popular than dog poop. Overall, large groups of Americans are not only far removed from each other, but also incredibly disconnected from their elected officials.

This is why Parks and Recreation felt like nothing short of a beacon of hope in its time on the air. More than anything else, Parks and Rec was a testament to compromise and common ground triumphing over petty partisan politics. This was a show less about making you hopelessly disappointed in your government and more about urging you to turn that disappointment into hope—and that hope into action. For seven seasons, it was unabashedly ideological and unapologetically optimistic.

What’s really telling about Pew’s findings is the fact that divisions are most predominant among those who are the most politically active, but Parks and Recreation always made you believe that those divisions don’t have to be the death of civil argument. In many ways, the show was an extended argument for rational but hopeful civic involvement. And it managed to be blisteringly funny at the same time, too.

Parks and Recreation felt like nothing short of a beacon of hope in its time on the air.

Some might say that this kind of upbeat attitude is foolish in modern politics; looking back at the 2008 election, Barack Obama‘s promise of “hope” and “change” might feel rather sour seven years later. Debuting at the beginning of the Obama administration, Parks and Recreation acknowledged that sometimes your best intentions don’t pan out. One of the show’s best storylines includes a Season 5 episode where Leslie Knope (Poehler) ends up being recalled from her city council position in the fictional town of Pawnee, Ind. And this was following a whole season spent on getting her elected to that very position.

Perhaps another advantage Parks and Rec had in terms of portraying our political system was that it was mostly focused on local government, a system that can be just as contentious and hilariously absurd as politics at any level. As Parks co-executive producer and writer Dan Goor once told the Atlantic‘s CityLab, “When we first started this, we went to the city hall of Burbank or Pasadena and we watched a town meeting with the city council. And in that town meeting they devoted probably 40 percent of the time to a woman who got up and complained about how the local pound had misplaced her cat. … So I think one thing we really like about local government is that you can tap into the natural passion that people have for government but you can do it in more ridiculous way.”

In reality, would someone as purely incorruptible as Leslie Knope ever make it out of local government? Probably not, but does it matter? Parks and Recreation existed in a period where viewers needed a Leslie Knope to inspire them.

In the wake of the announcement that he will be leaving The Daily Show, Jon Stewart has been criticized for making the electorate more cynical. “[Stewart] did his part to foster [an] atmosphere of distrust and scorn,” the New Republic‘s Alice Robb argued. “Hardly anyone—right or left, public figure or ordinary citizen—could assume they were exempt from his mockery. I’ve often found that watching Stewart attack everyone for half an hour can leave you feeling kind of hopeless.” According to Robb, a 2004 study in which viewers were tasked with watching Jon Stewart skewer presidential hopefuls John Kerry and George W. Bush “found that watching just eight minutes of The Daily Show left viewers across the political spectrum feeling much more negative about both candidates.”

While it is worth pondering the long term effect that Stewart’s tenure in political comedy has had on America, even more concerning has been the way the Internet has downgraded satire over the last couple of years. The Onion has set the gold standard for fake news; however, the many copycat sites, including the Daily Currant and Empire News, that have sprung up in an attempt to capitalize on its success seek only to further confuse readers, rather than making any actual commentary.

The ideological hopefulness of Parks always felt like such a gift.

It’s natural for people to be cynical given the current standard for discourse in America, but it’s a shame when satire starts to feed into that system, rather than calling the system out on it. This is why the ideological hopefulness of Parks always felt like such a gift. Unlike equally political shows such as Veep and House of Cards, Parks had little interest in delving into the scary or unknowable sides of government. The show’s central joke was never about giving up on democracy; it was about going to extreme lengths to make sure democracy doesn’t give up on you.

The vehicle for that idea was, of course, Leslie Knope, Parks and Rec’s ludicrously proactive hero. Though early episodes portrayed her as a female version of Michael Scott (from the show’s more successful predecessor, The Office), Parks eventually stepped out of the shadow of The Office. While early seasons relied heavily on a mockumentary style, season 7 practically tossed all the restrictions of the genre out the window. In so doing, Leslie Knope became her own character: smart, confident, and obsessed with breakfast; she was the kind of leader that is so hardworking that they inspire everyone around them to work a little harder, too.

It’s no surprise then that Leslie Knope’s brilliance on Parks and Rec also coincided with feminism’s emergence in popular culture, and it was Knope’s status as a feminist role model that proved to be the show’s strongest political message. Consider one of the many highlights from this past season, “Pie-Mary,” where they tackled the absurdity of the men’s rights movement. Leslie Knope’s concise, intelligent take on the issue: “Men’s rights isn’t a thing.” (It’s fitting that they got to finish their run days after the end of the toxically misogynistic Two and a Half Men.)

Leslie Knope was the kind of leader that is so hardworking that they inspire everyone around them to work a little harder, too.

The accomplished TV critic for the Huffington Post, Maureen Ryan, wrote on Monday that she was “grateful to Parks and Recreation because it taught my son that all kinds of people can work together on projects that benefit their communities, even if those people have different beliefs about how individuals should live and how societies should function.” However, Ryan writes that she is “most grateful” Parks and Rec for teaching her son about feminism: “Leslie experienced doubt and had flaws, but her commitment to altruistic ideas and the betterment and protection of other people was never in doubt. … Leslie was an explicitly feminist hero.”

Right through the final season, Parks and Recreation found new ways to innovate upon itself that also appealed to its small, loyal, and Internet-savvy fans. This year, they presented a not-so-farfetched view of the future, where a tech giant name Gryzzl is taking over the world by mining all their users’ data. The storyline interestingly showed how modern technology is often at odds with the kind of natural beauty that the show so frequently fought to protect. But above all, Parks and Rec will be remembered for its keen take on feminism, its refreshingly un-cynical worldview, and its ever-faithful assertion that doing everything you can to improve your government is both possible and necessary.

Parks and Recreation capped off its series finale last night with a quote from American President and famous national parks advocate Teddy Roosevelt, which reads, “Far and away, the best prize life has to offer is a chance to work hard at work worth doing.” Leslie adds to this, proclaiming that for her, “what makes work worth doing, is getting to do it with people that you love.” Through seven seasons of being the underdog, through dangerously rocky political terrain, through triumph and tragedy, Parks and Recreation reminded everyone who watched it that with those you love by your side, hard work is not only worth doing, it is the very thing that makes the world a better place.