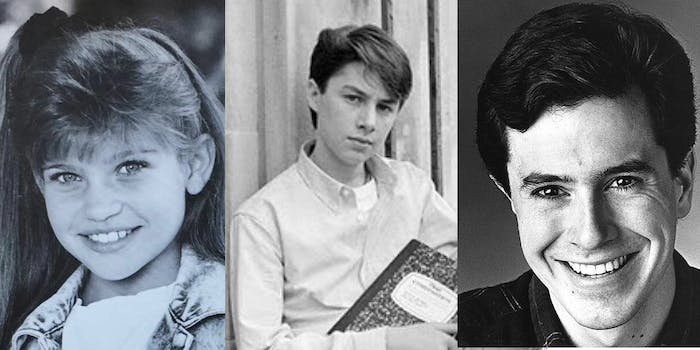 For actors, dancers, and a variety of performing artists, headshots are a staple of the business. They can also prove to be a wonderful snapshot in time. As a way to celebrate how far they’ve come—and perhaps get a good laugh, too—celebrities started sharing their old headshots to social media on Friday. In what quickly spread as the #OldHeadshotDay hashtag, celebs shared photos from their acting days of yore, and some are truly treasures to behold.

Take Danielle Fishel of Boy Meets World fame. She shared her shots from her early days as a child actress in the 1990s—and boy are her photos a throwback.

I triple dog dare you to find a more 90's collection of photos. #oldheadshotday pic.twitter.com/1H0UhskjXU

Reese Witherspoon‘s is also a gem of ’90s nostalgia and pre-teen self-confidence.

Zach Braff also got in on the fun, not once but twice, poking fun at his poses.

From the CBS After School Special, “My Summer As A Girl.”#oldheadshotday pic.twitter.com/L4LbVbaxQB

I don’t remember ever being this happy in my 20s… #oldheadshotday pic.twitter.com/XKpx1zIx3A

Viola Davis shared hers, as well.

#oldheadshotday. Shared this on IG earlier. Here ya go Twitter. Circa 2007 pic.twitter.com/V1xTQ8O8t1

Grumpy Cat also joined in on the fun.

Sad Kylo Ren also got in on the game.

ugh i hate this picture
it doesnt even get my good side
the dark side#OldHeadshotDay pic.twitter.com/14IVjxfety