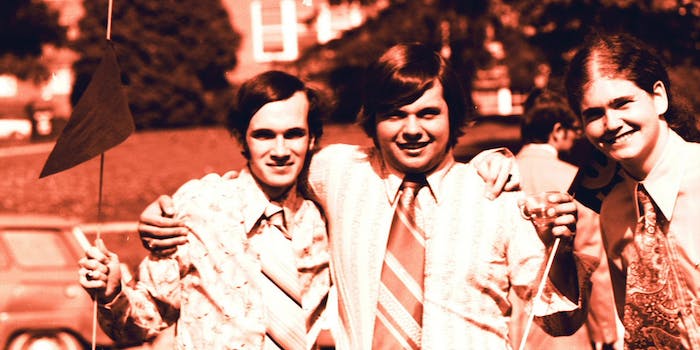 The painful reality behind the racist Oklahoma frat videos

Oklahoma’s problem is about more than a few bad eggs.

Racism is back, and it’s going to college.

Actually, it would be more accurate to say that racism has always been a part of college life, and this week has served as a painful reminder of that. A video of the Sigma Alpha Epsilon house at the University of Oklahoma went viral on Saturday, one in which its members chants, “There will never be a ni**** SAE. You can hang him from a tree, but he can never sign with me.”

Shortly after the video’s release, campus organizations and the University of Oklahoma football team protested in reaction, and the college’s president David Boren closed the SAE house, declaring: “As far as I’m concerned, they won’t be back.” SAE’s national chapter has also suspended the University of Oklahoma members and may ban certain members for life. President Boren is also exploring the possibility of expelling several SAE students, with the intent of targeting those who took an active lead in the chant.

However, Oklahoma’s problem is about more than a few bad eggs. No matter who was or wasn’t responsible, the SAE chant has provided empirical evidence that racism transcends lines of class, education, and most importantly, age.

Greek life on college campuses has been the source of quite a few racist incidents over the past few years, with racially themed parties a continued staple of the fraternity experience. (The 2014 comedy Dear White People was largely about this very issue.) Meanwhile, fraternities and sororities continue to be racially segregated, despite the fact that recruitment discrimination on the basis of race is illegal. As Clio Chang explains in U.S. News and World Report:

Take the University of Alabama, for example. The school was put on the hot seat in 2013 when the university’s newspaper brought to national attention that Kennedi Cobb, an all-around perfect potential new member (minus the fact that she was black) didn’t receive a single bid from any of the 16 sororities on campus. In it’s entire history, the universities’s sororities had only previously admitted a single black member.

Nevertheless, singling out the Greek system as the most problematic representation of racism among America’s youth would be a mistake. As the Internet has taught us, you don’t need to join a fraternity or a sorority to be young and prejudiced. Over the last several months, reactions to the civil unrest in Ferguson, Mo., have been extremely divided across lines of color, and due to the advent of social media, young people may be especially guilty of broadcasting their racist attitudes to the whole world. Remember Justine Sacco?

But can we entirely blame America’s youth for their own racism? Recently published research from the Proceedings of the National Academy of Sciences argued that children almost always are a product of their parents; parents who claimed that their kids were “more special than other children” and “deserving something extra in life” were disproportionately likely to produce kids with narcissistic traits. Racism can function the same way. After all, the Oklahoma frat brothers aren’t alone: A Vine of SAE’s house mother yelling racial slurs has now surfaced as well.

As the Root’s Jenée Desmond-Harris reminds us, social media has allowed us to confront these issues on an unprecedented level. “Facebook has given us the gift of knowing exactly what’s in the heads of people with whom our deepest conversations would previously have been ‘How have things been? Great, great, yes, we should really try to do lunch sometime,'” Desmond-Harris writes. “Sometimes that’s great, informative and inspiring. Sometimes it’s deeply disappointing and painful. But remember that nothing has actually changed; the technological tool is simply revealing a richer picture of who your friends and classmates have always been.”

If anything, the Internet is a reminder that while we are making some progress, we still have work to do in challenging the systems that reproduce prejudice and racist ideologies. While racism can be encouraged by parents, mentors, and anyone else part of an older generation, it is society’s ingrained prejudices that ultimately continue to enforce it.

The Internet is a reminder that while we are making some progress, we still have work to do.

That idea was backed up this week by an article from Politico‘s Sean McElwee, which argued that millennials are much more racist than they think they are. In a 2010 Pew Research Study poll, the group claimed “the younger generation is more racially tolerant than their elders.” However, McElwee isn’t so sure. He points to stagnant patterns which indicate that ideas of race often remain similar from generation to generation. For instance, McElwee notes that although 93 percent of millennials believe in interracial dating, that’s only up 1 percent from the 92 percent of Gen Xers who said the same. Moreover, 42 percent of white millennials believe that “a lot” must be done to achieve racial equality, yet again up a mere percentage point from the generation before them. And baby boomers actually were more progressive than millennials on the issue, with 44 percent answering the same.

However, things aren’t just stagnant. In many ways, they’re getting worse. The racial wealth gap has increased in the years since the 2007 financial crisis—to the point where black Americans who graduate from college have less money than white Americans who haven’t even finished high school.

Millennials are not significantly more open-minded or progressive than their parents were.

And that truth is that millennials are not significantly more open-minded or progressive than their parents were. While it might be simple to point the finger at bad parenting, these statistics also show that we can’t expect racism to simply evaporate with the passage of time. These are systemic problems that entail system solutions. How do then work to end racism for the generations to come? We must start by fighting our culture of police brutality, transforming our flawed legal system, and reforming incarceration practices.

However, the real key is learning to empathize with those who are different from us, as well as waking up to the everyday challenges black Americans continue to face. In short, things won’t change until we acknowledge that for far too long, they’ve stayed the same.

Photo via starmanseries/Flickr (CC BY 2.0)