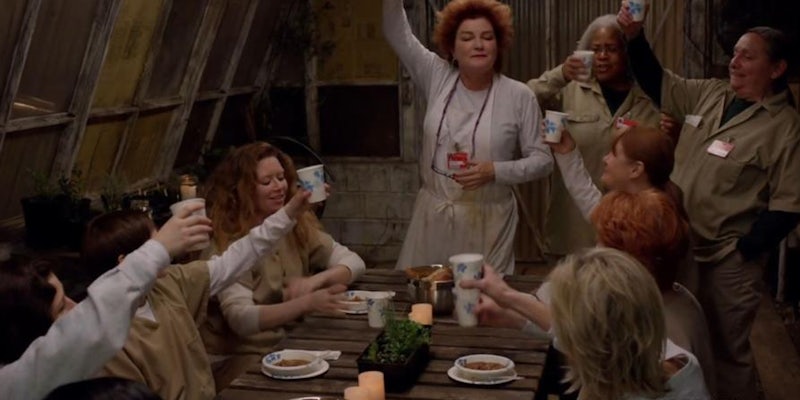 If you stopped paying attention (as so many do) after you got through the main acting categories, you might’ve been horrified at the lack of nominations OITNB’s performers received. Thankfully, Lyonne, Aduba, and Cox are not only present, they’re sure to make this the most interesting race for their category in years.

According to Mary McNamara of the Los Angeles Times, Orange’s impressive showing essentially represents the culmination of a movement that began several years ago. A movement that turned the tide for women on television.

Much has been made over the recent increase of female leads in television. Certainly, the great exodus from film to television began with women. When she couldn’t find roles in movies, Sally Field came to television, as did Glenn Close, Holly Hunter, Kyra Sedgwick, Mary-Louise Parker and Geena Davis. Women still working prolifically in film soon followed—Laura Linney, Toni Collette, Anna Paquin, Kathy Bates, Melissa McCarthy.

Their presence is not just a question of gender equity. As any good sociologist might have foreseen, this shift has changed how television tells stories, often blurring the lines between comedy and drama, between satire and pathos.

“But wait a minute,” you may be thinking, “Why have all my favorite OITNB characters been relegated to the guest category?” TIME’s Lily Rothman took the liberty of explaining this in detail.

First, there’s a contractual issue. According to the Emmy rules and procedures, the distinction between ‘supporting’ and ‘lead’ is one of character and the distinction between ‘guest’ and ‘supporting’ is one of contract… In other words, the producers get to decide based on an actor’s role whether a regular character is supporting, but a guest is a guest is a guest… And then there the Emmy eligibility dates. This year’s Emmys are looking at June 1, 2013 to May 21, 2014. In the case of Orange, that means we’re talking about the long-ago first season, during which a mere half dozen of the actors and actresses from the show were series regulars.

So there you go. Calling Crazy Eyes a guest on Orange Is the New Black isn’t an insult to her importance to the show, but rather a necessity that was set in motion as soon as Aduba signed her contract with Netflix. Next year’s nominations might look a bit different: Uzo Aduba and Natasha Lyonne were both already promoted to series regulars for season two, and this summer has seen several more actresses promoted in advance of season three.

Boring contractual/eligibility reasons aside, that OITNB will have a major presence at this year’s Emmys is still a victory. Even the recently out Jodie Foster’s directing nod denotes an important moment.

However, let’s not start the party just yet. Tempting as it may be to declare, “Women and minorities have won television! Pop culture patriarchy and prejudice is over!” the reality is that there’s still a lot of work to do.

Television has come a long way in a few short years. An Entertainment Weekly article by Jennifer Armstrong and Margeaux Watson from 2008 lamented the lack of diversity on TV at that time. Discussing the now cancelled Cleveland Show, they observed, “Cleveland Brown is shaping up as network television’s great black hope for the 2008-09 season—he’s the only minority character anchoring a new series on the Big Five networks… true, the person who provides his voice, Mike Henry, is actually white. But hey, it’s a start, right?”

In 2014, viewers don’t need to rely on Cleveland Brown to find a respite from white faces on TV. Beyond OITNB, they’ve got Scandal, The Mindy Project, Brooklyn Nine-Nine, American Horror Story, The Bridge, House of Lies, and a handful of lower profile series too.

Does this smattering come close to equal representation for everybody? Not remotely. The point is, TV is making progress.

But as McNamara mentioned above, the key is not just equity but quality. We’re still a long way off from seeing traditionally marginalized groups represented with the kind of complexity and visibility they deserve.  The simplest explanation for this is that old habits die hard, especially on TV. The more complicated one is that TV’s most recent “golden age” has been defined by a series of nuanced, morally conflicted characters that at one time would have never been allowed in the medium, but unfortunately, they’ve all been straight, white, males.

According to McNamara, this straight, white, maleness has continued to inhibit the advancement of television, even for otherwise great shows.

Male leads don’t even have to be likable. In this age of the antihero, TV prefers its men broken, complicated, intriguing. Likability can actually be a drawback.

Not so for female characters, for whom likability remains key. As some less-than-perfect female characters — Lori on The Walking Dead and Skyler on Breaking Bad—have proved, women still must display some measure of warmth, some degree of compassion, or risk audience vitriol. Don Draper can essentially abandon his children and still be the subject of our empathy, not so ex-wife Betty. Claire Underwood on House of Cards may turn out to be even colder and more calculating than her husband Frank, but she isn’t allowed to have nearly as much fun either.”

Indeed, it does seem that the world of television is okay with complicated female characters, as long as they’re not too complicated. The perfect illustration of this is the Emmy’s hesitancy to embrace Orphan Black, a show that’s entire existence relies on depicting the many sides of modern womanhood.

LGBT representation on contemporary television is a similarly mixed bag. GLAAD’s most recent “Where We Are On TV Report” found that the amount of prominent LGBT characters on cable had gone up from 35 to 42, with another 24 recurring characters in the mix as well. On broadcast television, however, where “Middle America” theoritically lives, only 26 out of 796 series regulars played LGBT characters. And the number of recurring LGBT characters had gone down from 25 to 20.

That’s why the current landscape of television is so interesting. Even amidst great progress, the facts have multiple layers. For instance, the idea of a trans character on television ten years ago (in anything other than an offensive or stereotypical role) would’ve been unheard of. NPR’s Neda Ulaby discussed how this is slowly changing. Ulaby posited, “Scripted drama is also a way to look at how trans people are being written into the narrative of American culture, not as marginal outsiders or issue-related guest stars, but as valued and beloved central players.”

That said, Ulaby also noticed some discrepancy in the rise of trans characters. She observed, “That said, trans women, rather than trans men, seem to be getting more attention in scripted television right now. There is a trans man character on the ABC Family show The Fosters, and in recent years, The L Word and Degrassi also featured transmen characters. But those shows haven’t enjoyed the visibility or buzz of Glee or Orange Is The New Black.”

There are reasons to focus on the positive though. Besides the women from OITNB, Mark Ruffalo, Andre Braugher, Jesse Tyler Ferguson, Nathan Lane, Jim Parsons, Joe Mantello, Matt Bomer, Beau Bridges, and Kevin Spacey (yes, you should count Frank Underwood) were nominated for playing LGBT characters. Ferguson, Lane, Parsons, Mantello, and Bomer are also out in real life, along with fellow nominees Sarah Paulson and Kate McKinnon. Looking at it from this angle, the LGBT community’s place on television is growing stronger by the year.

There is obviously a lot left to be accomplished, but that’s all the more reason to keep fighting. In a world where Iran can remake Modern Family and eliminate the show’s gay characters entirely, the necessity for American television to truly reflect what the world looks line in 2014 is palpable.

Lyonne, Aduba, and Cox are all extermely vital to Orange Is the New Black. Not only are they individually compelling in almost every way possible, they also add to the rich tapestry that OITNB has created. Schilling and Mulgrew are great too, but their presence on the show feels less revelatory. The characters of Nicky, Suzanne, and Sophia indicate a crucial moment for diversity on television, and in the future, hopefully the Emmys will be able to recognize them as more than guests at the party.

Pondering the state of television in 2013, Margaret Lyons of Vulture said, “I hope there are more next year…more stories by and about women of color, queer women, and women with a wider range of body types and physical abilities. One show, one character—that’s not enough.”

It’s not enough. And it’s no more enough in 2014 than it was in 2013. Only when we elevate these roles from guests, to supporting players, to leads, will it finally be enough.

Photo via Orange is the New Black/Trailer