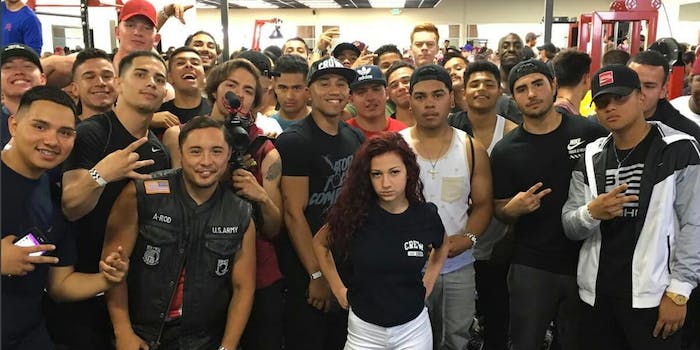 The infamous “Cash Me Ousside” teen Danielle Bregoli has signed a tour deal with Live Nation—no, we’re not kidding—and, according to TMZ, her tour rider and it’s about as wild as one would imagine.

First of all, she insists on staying in four-star hotels or better. She also wants $750 for walking around and an extra $3,000 to cover security costs—on top of the $50,000 she will pocket from each sold out venue.

Her demands don’t stop there. They actually get more ridiculous. She wants the following from each venue:

So far, most people seemed more concerned with how Bergoli snagged a tour deal.

Tour????….tour what..she can't sign dance or act… Will she be just cursing at the audience. And if you buy a ticket you DESERVE it

What a joke. What does she do? This reminds me of when Bart Simpson toured because of a catch phrase "I didn't do it". Got old real fast.

Please tell me this is a joke. She is not famous or anything special. Words again ppl just words who would pay to see this kid

Tour of what? Being ignorant? Oh I get it. Stay in school or cash me outside!

Bregoli’s tour will consist of a three-part act, according to TMZ. First, she will lip sync and rap—with “established acts making cameos”—followed by a live Q&A with the audience. She will finish the “performance” by inviting audience members onstage to “joke around.”

Nothing is yet set in stone. Bergoli has to nail her first “test” shows first. If she sells out venues on July 8 in Fort Lauderdale and July 9 in Houston, Live Nation will consider a nationwide tour.