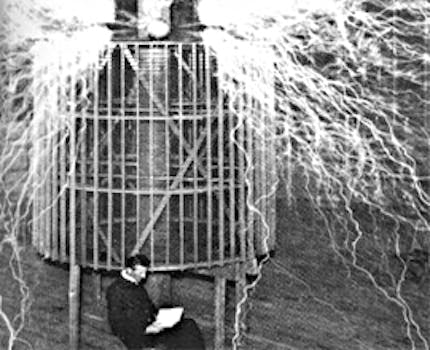 The Oatmeal isn't the only one working to call attention to "the world's most famous unknown inventor."

Nikola Tesla is more than a pop culture meme for scientist Wilhelm Cashen. The former hybrid car designer, a self-described “real Teslaphile,” has made the inventor’s legacy his life’s work.

“I’ve known ever since I saw my first Tesla Coil,” he tells me, with a reverence typically reserved for superheroes and magicians.

Tesla is a bit of both for his fans, who want to see his scientific contributions restored to the forefront of American history.

Cashen’s Kickstarter project to fund his docudrama, Electricity: The Life Story of Nikola Tesla, lacks the publicity behind The Oatmeal’s recent movement to build a Tesla museum—which has already raised $750,000 toward its $850,000 goal.

Cashen’s project has only 19 days to raise $30,000. But he says the money isn’t important. He just wants the public to learn more about Tesla.

Right now, he wants me to close my eyes and take a trip into the past.

“Picture Madison Square Garden,” he says, with the well-rehearsed pattern of someone who’s taken this stroll down memory lane many times before. “In November of 1898, Tesla invited a group of scientists and the public to witness the first remote-controlled electric boat.”

Cashen describes the 19th-century public’s reaction to seeing robotics in action for the first time in history. “To see an electric remote-controlled object, they came in horse-drawn carriages and on horseback.” He points out the huge gap between Tesla’s technology and the age he lived in, calling it “vision distance.”

“Documentaries never treated Tesla as the foundation guy, who built the foundation for everyone and everything else: Edison, air conditioning, you name it,” Cashen tells me excitedly. “We want the audience to go, ‘Oh, that’s where that came from!’”

Though you might think Tesla’s fame on the Internet equals his fame throughout history, his  contributions to modern science have been largely downplayed in favor of his more capitalist-friendly colleague Edison. “The first time I went to the Henry Ford Museum,” Cashen recalls, “everything was Edison, Edison, Edison.”

Cashen learned about Tesla as a freshman at Notre Dame. “Tesla was one of the first disruptive technologists in the world,” he tells me.

Tesla’s refusal to cater to the monopoly interests of men like J.P. Morgan meant he lacked the clout of an Edison or a Henry Ford. He saw his patents reversed when they conflicted with corporate interests, and according to Cashen, “had to become a showman” in order to deliver his message. “He invented paparazzi. He was the world’s most famous unknown inventor. He was The Dude.”

Scientists around the world still feel the love. Tesla Societies span the globe, and online communities for his projects are thriving. A 3rd-grade teacher in Ann Arbor successfully fundraised to place busts of Tesla in universities across the country.

Ian Chaffee of SocialRadius told the Daily Dot that now is “the perfect time to learn about Tesla’s visionary work and bittersweet biography.” He mentions the famed Oatmeal meme and the rumored Tesla biopic as part of the recent craze to explore all things Tesla.

Cashen describes Tesla’s cultural meme status as an expression of the human desire to support the underdog, the unknown hero. He believes so strongly in the call to educate the public about Tesla that he formed Tesla Productions, an enterprise group planning an interactive online museum in addition to the docudrama and other Tesla education projects.

“Tesla created our modern industrial complex, and he’s been forgotten. I can’t sleep at night and allow that to happen,” he tells me.

“I have my marching orders for the remainder of my life.”