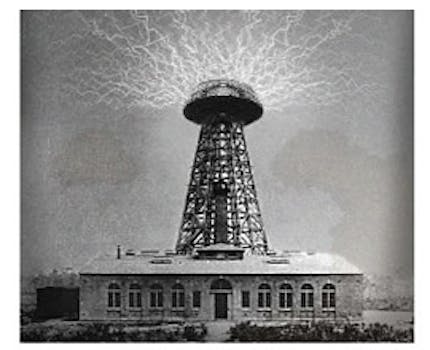 Matthew Inman, creator of The Oatmeal, is no stranger to fundraising, Now he's using his popularity to secure the legacy of his favorite scientist, Nikola Tesla.

What do a laser pigeon and an enormous wireless tower have in common?

They’re both part of the legacy of Nikola Tesla, a legacy that thousands of science fans are currently banding together to save.

Before he was a Kate Beaton meme, and even before he was an early 20th century sex idol, scientist Nikola Tesla was one of the greatest scientists who ever lived. The inventor of early wireless technology and alternating current distributors has long held a place in our hearts.

And no one loves him more than Matthew Inman, famed creator of The Oatmeal, whose legendary paean to Tesla (and his laser pigeon) has garnered nearly 600,000 likes on Facebook alone.

Now, Inman is tapping that universal well of love for a good cause: saving Wardenclyffe Tower, Tesla’s lab, which is currently under threat of being razed and used as commercial real estate.

Forbes reports that Inman learned about the sale of the land Tesla’s laboratory resides on from Twitter. Inman also learned that the state of New York had pledged to the non-profit Tesla Science Center to donate half of the $1.6 million needed to purchase the land.

Inman is no stranger to successful viral campaigning: his charity campaign against FunnyJunk and attorney Charles Carreon raised $200,000 more than its goal of $20,000 and even convinced Carreon himself to donate. Perhaps the most noted Tesla fan on the Internet, Inman was the perfect person to get the word out.

On his Indiegogo campaign, aptly titled, “Let’s Build a Goddamn Tesla Museum,” Inman points out that there’s no Tesla museum in the U.S. He also notes that if the Tesla Science Center and the Internet can win the bid for the land, the Tesla estate will be permanently protected.

The Internet has responded. Though his fundraising comic has been up less than two hours, “Let’s Build a Goddamn Tesla Museum” has already raised nearly $80,000, with between $10,000 and $13,000 raised in the first 20 minutes alone.

Inman, whose comics at Oatmeal are known for their pithiness, isn’t pulling his dolphin-punches this time either. “If Batman were real he’d totally sponsor the shit out of this museum,” Inman insists. It’s crude marketing, but it appears to be highly effective.

Tesla would doubtless have approved.