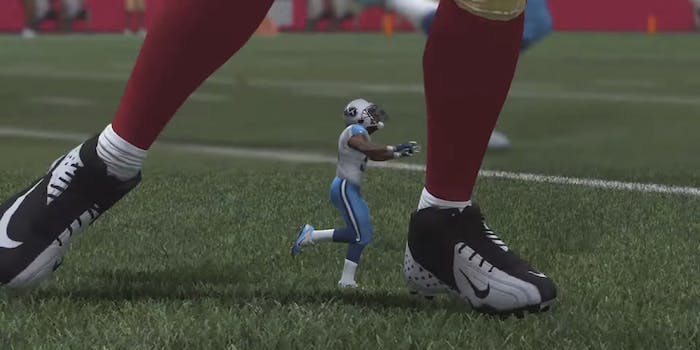 Christian Kirksey is having a good laugh.

Cleveland Browns rookie Christian Kirksey is an early standout on Madden 15. The first-year linebacker has unreal burst and strength for a player listed at 1’2″. Thing is, Kirksey is 6’2″ (and not a Tennessee Titan) in real life—making the “Tiny Titan” glitch the most adorable moment in Madden history—and the funniest since that one time that Greg Jennings scored on the Saints with a broken leg.

He tried going for the pick pic.twitter.com/w9ZdcutwuR

As someone who spent too many hours tinkering away at a Madden dynasty from the late ’90s through my 2006 retirement, I can tell you that there is no thrill greater in the NFL video game than playing as yourself and wreaking havoc (Ramon Ramirez, quarterback, Dallas Cowboys, was basically the brown Superman). As such, Kirksey—a third-round draft pick—has been thoroughly amused by Tiny Titan.

No matter how small you are, have big dreams, and live big! #madden #glitch #1’2 #reallyLOL #goodmessagetho

This glitch of me on madden is hilarious might I say! #lol #laughitsgood

Check out Tiny Titan in action.

That Madden glitch that creates the “Tiny Titan” is hilarious. Ironic that it happened on the Titans of all teams pic.twitter.com/jMHVS4ygbY

HE GOT THE FUMBLE pic.twitter.com/O8rg8hdhlj

When you get down to it, it really is pretty motivational.