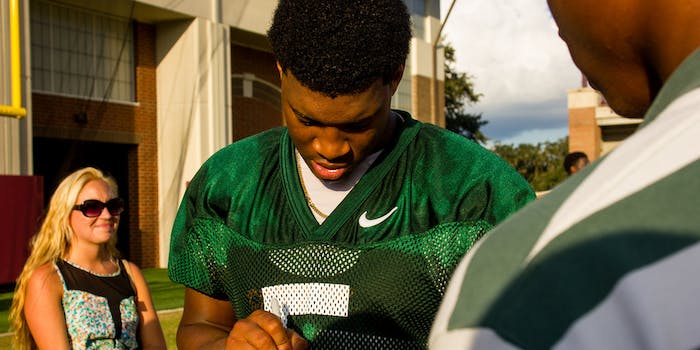 This is what an invitation to the NFL draft looks like

But amid controversy, will the NFL's brightest new stars even show up?

The NFL draft is moving to Chicago this year, and in order for a collegiate player to attend, he has to be invited. If you’ve ever wanted to see the actual, formal invitation, here’s your chance.

This was what Wake Forest cornerback Kevin Johnson, a potential first-round pick, received from FedEx recently. 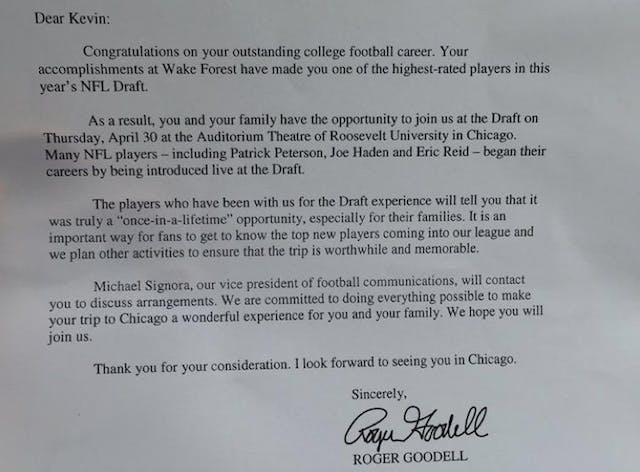 In case you think that’s a form letter with just a few details and names changed here and there, well, you’re pretty much right. Here’s the letter Goodell sent to former Texas safety Kenny Vaccaro before the 2013 draft. 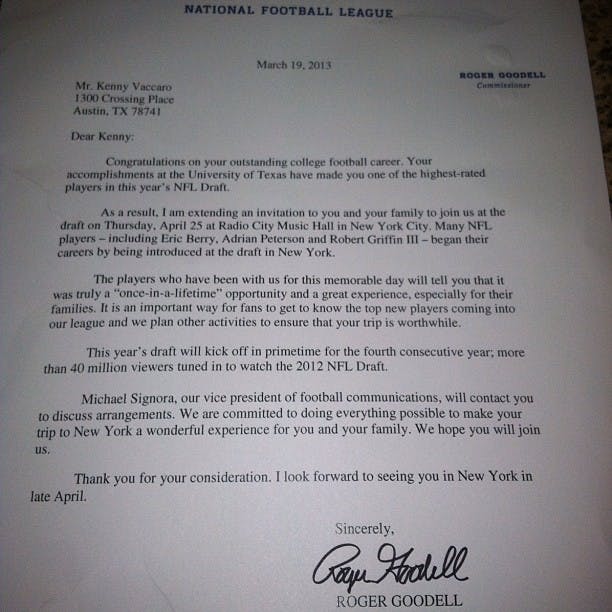 This year, though, watching the NFL draft from the green room and then coming onto the stage to hug Commissioner Roger Goodell when he calls names doesn’t appeal to a few of the highly rated draft picks.

Oregon quarterback Marcus Mariota reportedly is set on watching the draft with his family in Hawaii, while Florida State quarterback Jameis Winston—who very well could be the No. 1 overall draft pick—also apparently will skip the Chicago trip and hang out in Alabama. From Winston’s adviser:

Normally, a few dozen of the top NFL prospects converge in the draft city a few days beforehand, making public appearances and participating in charity events. After they’re selected and hug Goodell, they typically fly to the city of the team that drafted them in order to begin meeting the local media and fans.

But with Winston and his controversial past potentially landing at the No. 1 spot, the Washington Post recently opined that it might not be a bad choice for Winston to avoid Chicago.

“It might be the right move for Winston, who has had a myriad of off-the-field brushes with the law,” wrote Cindy Boren. “It would be weird to leave Roger Goodell hanging, with only himself to hug, after he announces the first pick, but it might be worse to hear the first pick booed… And it might be a bad move  for the NFL, which has had its share of PR gaffes and bungled punishments over the last year, to trumpet Winston as the No. 1 pick.”

As for whether Johnson will accept his invitation, the Baltimore Sun reported that he’s leaning toward going.