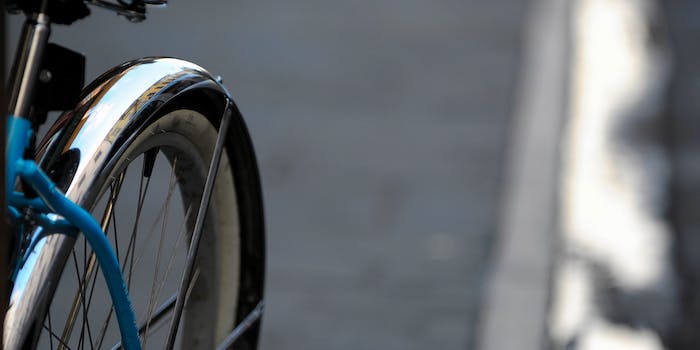 Here in New York, one of our biggest pastimes, right after disparaging other cities’ pizza and giving tourists bad directions, is arguing about bike lanes. This week, the YouTube perspective of one particular cyclist—uploaded in 2011—is trending hard on Tumblr.

The satirical clip begins with filmmaker Casey Neistat receiving a summons from an NYPD officer for failing to ride his bike in the designated lane. Neistat, as most of us would have done, tries to reason with the cop, saying that it’s not always possible or safe to stay in the lane. He also points out more egregious traffic violations all around them.

No dice: Neistat ended up paying off the $50 ticket, even though the legality of the charge was in doubt. Still, he wanted to encourage others to think a bit more critically about what it means to stay in the bike lane “at all times.” To that end, he shot a video where he repeatedly crashes into various obstacles in the lane—most of them placed there by city authorities, as it happens.

Sure, maybe he could have steered around that orange caution barrel or pylon, but that taxi is definitely in the way, as is that giant truck (which provides the video’s best laugh). Even a police cruiser is found to be blocking the sole, narrow pathway for cyclists. One take that could really have bolstered Neistat’s argument, though? Running over a clueless pedestrian in Herald Square.

All the same, the point stands: it’s not easy being a cyclist in New York, especially if we’re going to hold them responsible to a set of regulations that have no basis in reality. Still, when you want to suggest you’ve got common sense on your side by crashing your bike into stuff, you probably ought to wear a helmet. Those are some bone-rattling falls Neistat takes, as the shocked onlookers confirm.

Have things gotten better for New York cyclists since then? The furor and scorn over the Citi Bike bike share program demonstrated that, at the very least, residents are happy to continue bickering over the rights of bike riders, drivers, pedestrians, etc. The only thing all these factions seem able agree on is that those pedicabs are a real nuisance.

Photo by I Travel East./Flickr