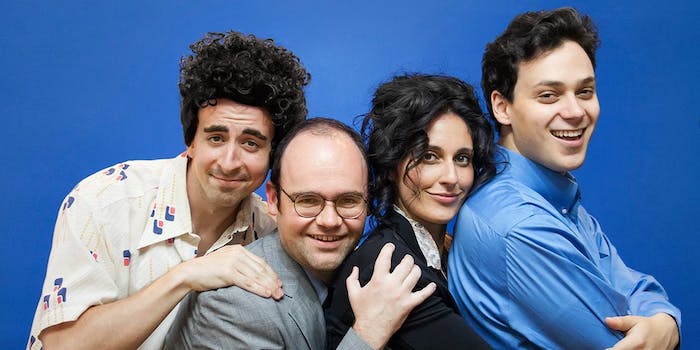 How a sketch comedy team resurrected ‘Seinfeld’ for one more episode

Finally, a sketch show about nothing.

If you’re a fan of Seinfeld, good things are coming your way, courtesy of the Internet. The canonical sitcom hits Hulu on June 24, and if you can’t wait for that, an Upright Citizens Brigade Theatre sketch comedy team called Bellevue has just the thing to tide you over: a whole new episode.

The episode, “The Leaning Susan,” is replete with excellent impressions, ’90s commercials, and a brilliantly bleak plot. George’s fiancé Susan inexplicably returns from the dead, and, much to George’s dismay, it looks like she’s here to stay. Noah Forman, who plays Jerry in the performance, uploaded the show to Bellevue’s YouTube channel earlier this month, and it has since racked up an impressive 100,000 views.

If the story sounds like it skews slightly absurd, it should.

This “episode” is expertly faithful to the tropes and tones of the beloved sitcom, but Bellvue created it with the intention of doing something a little bit different.

This “episode” is expertly faithful to the tropes and tones of the beloved sitcom, but Bellvue created it with the intention of doing something a little bit different.

“We knew it had to be slightly off,” Dru Johnston, who plays George, told the Daily Dot. “Otherwise we’re just writing a spec script. And we wanted to bring Susan back, because Joanna [Bradley] is a dead ringer for Susan. So we thought if we have her come back but treat it exactly the way Seinfeld would treat it, we can make it work.”

Last September, the team wrote and mounted the episode as part of Maude Night, a weekly sketch show where house teams typically perform sketch revues. Equipped with a couple of extra weeks’ time for planning and writing their show, the 11-person team decided to attempt something a little more ambitious: take a running joke and turn it into a half-hour show.

Cathryn Mudon, who plays Elaine with eerie accuracy, was thrilled at the chance to finally do an Elaine impression for the show. “[At our meetings for Maude night], I was always trying to weasel in an Elaine sketch. I remember coming into the first meeting [for “The Leaning Susan”] and feeling like I was in a dream world.”

“When Cathryn would pitch sketches, we’d be like, ‘There’s no way we can just write another comedic character into a sketch. There’s no way it makes sense,’” said Johnston. “And then someone was like, ‘The only way to do it would be to write a whole new episode of Seinfeld,’ so that became a running joke for a few months.”

Once the joke became a reality, the team cast key roles and worked tirelessly to perfect the script and the performance. “We were all pretty hard on ourselves,” Forman told the Daily Dot. “We wanted to make sure we were doing it right and that we were doing it in this Seinfeld voice.”

The show opens, in typical Seinfeld fashion, with a brief stand-up routine. “I was more nervous for this than any other performance,” said Forman. “I thought, if I go out there and this fake Seinfeld doesn’t go well, that will be the worst. But people were clapping and cheering—not at me—but they were happy to pretend that we were the real characters. Even if my Seinfeld impression isn’t the greatest in the world, people wanted to go there for a little bit and trick their brains into thinking they were watching a real episode.”

The show was so successful, in fact, that it received its own run at the competitive theater. The team went on to perform and tweak the show, always aspiring to improve each performance. And often laughing when they couldn’t quite get something right.

The team went on to perform and tweak the show, always aspiring to improve each performance. And often laughing when they couldn’t quite get something right.

When a particular line didn’t get laughs, for example, they made a game out of it by passing the line from performer to performer.

“In the second act in the one scene we have in the diner, Jerry says there’s a lot of things about women that I don’t understand,” explained Forman. “On paper, we were like this is just Jerry being like, ‘I don’t understand women.’ But then I said it and it wasn’t just silence, it was a judging silence. It got the opposite of a laugh. And I was like, ‘Guys, we gotta cut this line, and, to mess with me, everyone was like, no we’re gonna leave it.”

“I was giving you the hardest time about it,” said Johnston.

“I was like, why doesn’t George say it?” said Forman. “And then that got an even worse reaction.”

They went on to give the line to each and every character they could imagine.

“We even gave it to the waitress, played by Claire Downs,” said Johnston. “Then we had Joanna, as Susan—as a complete non-sequitur—open the door and scream the line. One time we all said it in unison.”

In the version available on YouTube, Forman delivers a revised version of the failed line, and the audience erupts into laughter.

“This goes into the thing that it is a group effort,” said Johnston. “But I think the funniest joke of the entire thing is the two Asian businessmen being so over-the-top, and that was something we just wrote as businessmen, and then at tech [rehearsal] Nathan Min did it in that over-the-top accent and we were like why didn’t you do that in our meetings, that is one of the funniest things!”

“And Nathan was like yeah, that’s how Seinfeld does businessmen,” added Forman.

Despite their effort and enthusiasm for staging the show, the group continues to be dazzled by the episode’s success.

“We almost didn’t film it,” said Mudon. “Maude night is a very forgiving and enthusiastic audience. So to do something for Maude and then perform it for a bigger audience and have it go so well has been really wonderful.”

“Everyone worked as a huge team,” said Michael Antonucci, who plays Kramer. “And it was really fun to go there.”

Although the team retired from Maude night last fall, and there are no future live Seinfeld episodes planned, they will be doing “Improvised Seinfeld” at the theatre’s annual Del Close Marathon. So now you know the deal with that.

Improvised Seinfeld is at 4:30 PM on June 28th at the Upright Citizens Brigade Theatre.