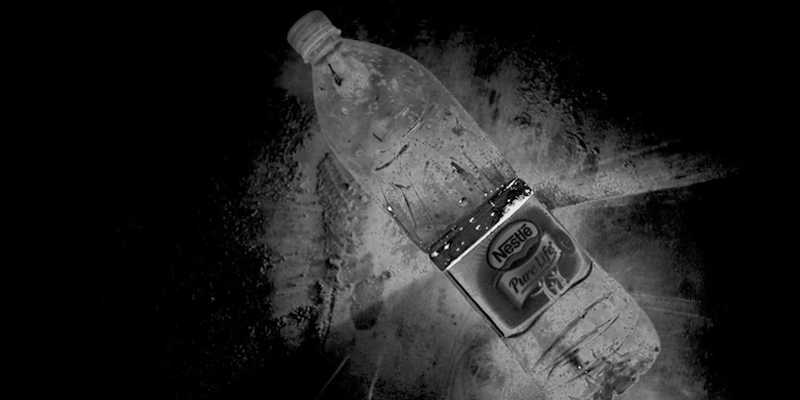 Bottling water in drought-parched California is just the beginning.

There’s a Nestlé controversy brewing up this week as the firm comes under the gun for resolutely continuing to bottle water in California despite the state’s historic drought. While Governor Jerry Brown has instituted restrictions on water use and Californians—ironically—are being forced to buy bottled water because their own wells are running dry, Nestlé is pumping a shockingly unknown amount out of California aquifers.

The company’s abuse of California’s resources is reason enough to be angry at Nestlé, but it’s just the tip of the iceberg for a firm with decades of controversy behind it. It’s been the target of multiple boycotts and protests, Twitter campaigns against the company, making it an almost irresistible target for ire among Californians angry about water bottling practices in the state.

@ExposingALEC @DaleF3 AND #Nestle CEO said Water is not a Human Right. #BoycottNestle

“@RelapseDNB: @guardian Nestlé proving once again how they really do not care about anything else other than profits!!!” #BoycottNestle

Hating Nestlé for its abuse of California’s water resources is a start, but there are other reasons to express concerns about the company, which is one of the largest food and beverage firms in the world. Nestlé’s influence sprawls across hundreds of brands and nations, and along the way, it’s made a number of corporate stumbles.

The company’s most infamous misdeeds lie in the highly profitable industry behind infant formula. In the 1970s, Nestlé attracted global attention with a boycott centered around its formula division. Critics of the company claimed that it was “hooking” new mothers in the Global South on expensive formula with the use of misleading advertising, representatives wearing nurse’s uniforms and pushing formula, and goodie bags with free samples.

Once breastfeeding women started weaning and transitioned to formula, they weren’t able to go back—and they were forced to keep buying the expensive product or run the risk of allowing their babies to starve. Pro-breastfeeding activists argued that inadequate access to breastmilk exposed babies to increased health risks—as breastmilk carries antibodies from the mother and is also uniquely formulated to infant nutritional needs, perhaps unsurprisingly—and that poorly balanced formula could leave babies with health problems.

Activists organized an international boycott that was officially sustained until 1984, when Nestlé agreed to reform its practices. However, when the firm continued to violate labeling laws and its own promises, activists took up the cause once more, and the controversy rages on. Baby Milk Action, a major player in the dispute, has outlined a four-point plan with demands for Nestlé, but the company hasn’t responded.

Among many chocolate companies, Nestlé is fingered as a culprit in the use of child labor in cacao plantations. Child slaves radically reduce prices for chocolate production, with companies like Nestlé choosing to ignore slaves in their supply chain. Last year, an appellate court approved a lawsuit filed against Nestlé, accusing the company of tacitly supporting child slavery by refusing to enact tighter controls on what farms they buy from. The major confectionary firm doesn’t directly own chocolate plantations in nations like Africa, but given that it’s a major global customer with extremely aggressive pricing demands, it effectively dictates the conditions on the plantations they work with.

In 2012, the Fair Labor Association accused Nestlé of violating its own labor code, highlighting the fact that corporate responsibility pledges are toothless without third-party oversight. The stakes for the cocoa industry are high: Worldwide, the commodity is worth nearly $100 billion.

The company’s attitudes toward organized labor, especially in the developing world, are notorious in the labor community. Workers who attempt to organize at Nestlé facilities have been threatened with firing and have also been physically intimidated; in India, for example, Nestlé successfully won a court injunction to ban labor organizing activities near its facilities. Ultimately, workers fought and won, but it wasn’t the first time Nestlé had attempted to crack down on organized labor.

Nestlé, like other multinational firms, also has a history of locating production facilities in nations with lax labor laws. This allows the company to evade close scrutiny of its labor practices. With factories in locations like Colombia, North Korea, and China, Nestlé dodges some accountability—such as the more aggressive oversight seen in the United States, where employees enjoy many more legal protections.

Twitter users witnessed a fascinating and bitter fight between Greenpeace and Nestlé in 2010, when the environmental group went after Nestlé for the use of palm oil in its products, particularly Kit Kats. The ingredient is highly controversial due to issues like rainforest clear-cutting and habitat destruction for a number of animals, including orangutans. The group accused Nestlé of using suppliers known for clear-cutting for the purpose of palm oil harvesting without permits or government oversight.

The company agreed to seek “sustainable” sources for its palm oil and to implement better supply chain management. It pledged to fully address the issue by 2015—but without aggressive monitoring on the part of a neutral organization, it’s difficult to determine whether Nestlé is abiding by its own promises. The Union of Concerned Scientists also expresses concerns about the greenhouse gas emissions associated with palm oil production in Nestlé’s supply chain.

California is the latest victim of Nestlé’s highly profitable bottled water division, but it likely won’t be the last. At NPR in 2013, Thomas Andrew Gustafson explained why bottle water can’t be produced sustainably, but it hasn’t stopped Nestlé and other firms from getting involved in the multibillion dollar industry. The “water footprint” behind a single bottle can be as much as seven times higher than the actual content of the bottle, a chilling thought for environmental advocates.

In California, Nestlé bottles water in desert regions of the state that are already struggling with water shortages, and it refuses to disclose how much it processes at its facilities. In Wisconsin, the firm became involved in a protracted dispute over pristine water sources, while Nestlé has also made itself extremely unpopular in Oregon. Critics also accuse Nestlé of privatizing what should be a free public resource across the United States.

Reporting on the situation in California, David Dayen at Salon notes that Nestlé gets around water usage restrictions by pumping on reservations, which are not accountable to states because of their status as sovereign lands. The water table, however, adheres to no boundaries, and excessive pumping in one area devastates groundwater reserves in another. California’s aquifers are being too quickly drained to recharge themselves, leaving the state thirsty.

For a dramatic illustration of the effect of excessive groundwater usage, researchers suspect that some of the rise in our oceans’ sea level can be attributed to aquifer depletion. Water is flooding out so quickly that instead of returning to the ground, it’s running out to sea.
The longstanding Nestlé boycott, organized in an era when people had to pass information about civic actions along via telephone, letter campaigns, and other sometimes sluggish communications, illustrates how dedicated anti-Nestlé activists were 40 years ago. Today, the campaign demanding reform may be under #noNestle and scattered across the Internet, but it’s even stronger. Widespread horror over the company’s practices in California may prove to be a tipping point, especially for its bottled water arm.

As it turns out, there’s a reason to hate Nestlé for everyone—fun for the whole activist family, if you will.
S.E. Smith is a writer, editor, and agitator with numerous publication credits, including the Guardian, AlterNet, and Salon, along with several anthologies. Smith also serves as the Social Justice Editor for xoJane and will be co-chairing Wiscon 40—the preeminent feminist science-fiction conference—in 2016.