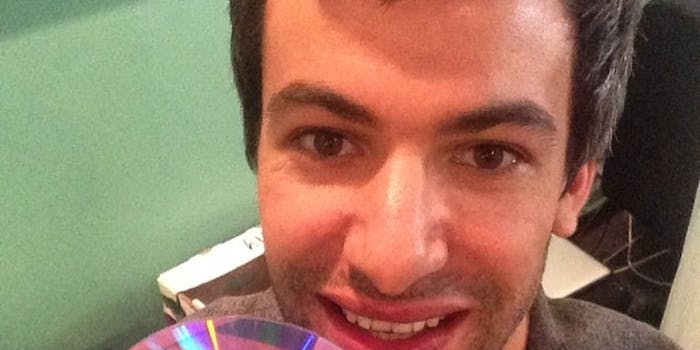 Nathan Fielder is hiding something very NSFW in his Instagram photos

You might want to look at that photo a little more closely. Actually, on second thought, don’t.

Warning: This article contains some explicit material and may be NSFW.

Instagram is pretty strict when it comes to removing photos that violate its community guidelines on nudity. In the past couple months alone, Rihanna and Scout Willis have had photos removed and their accounts suspended, while vlogger Meghan Tonjes had her butt selfie removed by mistake.

But Nathan for You star Nathan Fielder’s latest prank has managed to fly under Instagram’s radar for some time.

Fielder started an Instagram account earlier this month, and so far, it’s just been a bunch of selfies of the star.

However, if you look more closely at the photos, you’ll notice something reflected in each and every photo.

With each photo, the masturbating-man reflection gets a little easier for his followers to see. At first it’s just a reflection on Fielder’s sunglasses, and then he ups the ante by reflecting it in a DVD and a kitchen knife.

His most recent photo, which featured the image in the rearview mirror of his car (according to Uproxx’s Danger Guerrero), was quickly removed by Instagram. It seems the company is finally starting to catch on, although the other four photos still remain on the site.

You can undoubtedly see more of Fielder’s pranks when Nathan for You returns to Comedy Central on July 1.