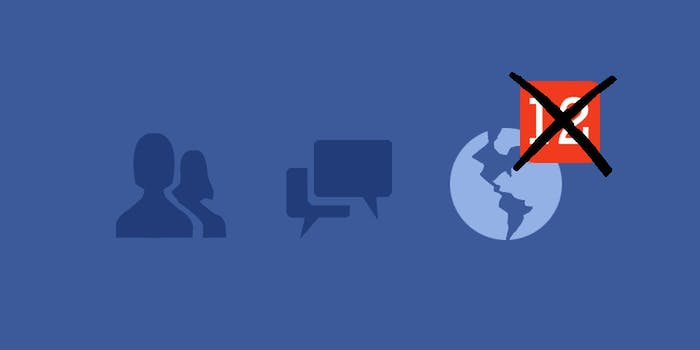 The Hater: Facebook, we need to pick our own battles

Those notifications about other people's comments? They're just so. Damn. Pushy.

One of the approximately 9,000 reasons I don’t have kids is this: The only minutiae I care about is mine. I don’t need to know anyone else’s every move, thought, or sandwich.

And although I think 99% of Twitter (myself included) consists of people posting about their paper cuts, here’s what I do like about it: I don’t have notifications set up. If I want to see if someone’s sent me a note, I have to go to Twitter to find out. The onus is on me. And I’m okay with that.

And while I have my settings adjusted so that I don’t get an email every time something happens, I’m not going to lie: Whenever I open Facebook, on laptop or mobile, I have my eyes trained on where that little red flag and a number should be. If there’s no red flag, I’m sad. If there’s one or more numbers, I’m curious. Maybe even happy.

Because that means people are into what I’ve said.

And it’s not about me.

Other people “Me too!”-ing on an acquaintance’s status that I shouldn’t have bothered to comment on in the first place. Other people joining a group I should opt out of. Other people posting a photo from an event from at which I didn’t stay for photos.

I’m a narcissist. I hate it when I think a notification is about me—and then it’s not.

So I’m one of those people who “likes” the shit out of things on Facebook. It’s probably annoying when you see all my likes in your newsfeed, if you like to look at Facebook’s “activity-ticker.” How can the Hater like so much, right?

You know why I like all that I do?

It’s because I’m a real-life introvert, but a social media extrovert.

Facebook has been making all kinds of adjustments to their notifications and ads lately. Ads that look like game notifications. Creepy bubbles of friends’ faces on my iPhone, when I have a message (which scared the shit out of me before I understood what it was). Invites to games—not really relevant, thankfully, because most of my friends know better, and I’ve blocked the ones who haven’t.

But the adjustment I’d really appreciate (and if they do it already, let me know) is this: When I comment on something, ask me if I want to be notified when someone else comments.

Come on, Facebook: You can add coding that lets me insert a photo into a comment. So why can’t you ask me if I’d like to be notified for each thread that’s out there?

For example, say you’d like to go beyond “like” and actually comment on someone’s lovely new house/baby/shoes/apple blossoms. Do you need umpteen-thousand “Wow! Beautiful!” boredoms? Wouldn’t it be great if you could simply select, “No, I don’t want to be notified,” and move on?

But say on the other hand you want to start or participate in a flame war. Or you find yourself involved in a rabid political discussion. Wouldn’t you want to be notified when it’s time to get all angry and righteous behind the safety of the Internet?

Let me pick and choose my battles. Literally.