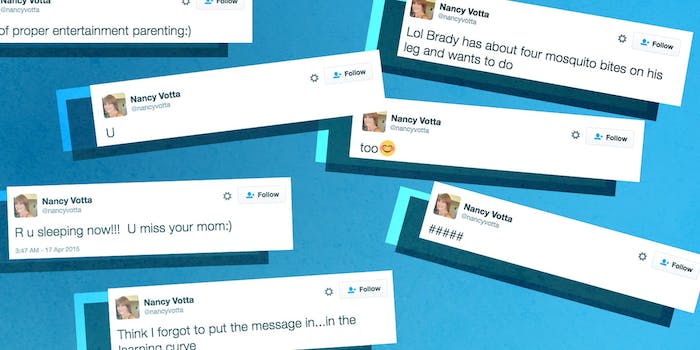 My mom has been accidentally subtweeting me for years

She's a master of the secret, shady message.

Finding a subtweet about you can sting, but finding out your mom has been subtweeting you on the regular for two years is a special combination of painful and fall-off-your-chair-hilarious. Especially when your mom doesn’t believe technology has advanced enough for Microsoft Word’s find-and-replace function to exist and emails documents with written instructions whenever she needs to copy-paste text.

She doesn’t get technology, so she doesn’t know how shady she’s being.

Some backstory: when I set up my mom’s Twitter account a few years ago, she mostly wanted it so she could follow me and my brother. She doesn’t go onto the app or her own timeline; I set it up so that every time David or I tweet, she receives it as a text. (Which is a great gut-check on whether I should really be tweeting something, even drunk at 3am.)

Mom’s more of a Facebook person, seeing daily, algorithmically-chosen updates on memes, news stories, and quizzes. Twitter is not her medium. But every once in a while, she tweets back at me. Little did I know she’s been tweeting at me more than I realized, just forgetting to actually @ me.

My mom doesn’t know it, but she’s the queen of subtweets. She’s a whole subtweet feed just for me. My mom is my own personal troll. I discovered an amazing run of tweets dating back to 2014 until now. So trying to work backwards and decipher what my mom was subtweeting me about is now my new life’s work.

to the doc .. He has sensitive skin like you that mosquitoes love😊

This is the tweet that tipped it all off. I had called my mom, and she mentioned that she thought the tweet she’d sent me didn’t work. I went to her Twitter account and found the treasure trove. I’d tweeted about burning a success candle on my copy of the Alexander Hamilton biography, which is something worth subtweeting a human about, but my mom’s tweet wasn’t really about my weirdness—she just wanted to share what was up with my 2-year-old nephew, who has mosquito bites that he thinks are bruises because he doesn’t understand the concept bug bites yet. I also am prone to bug bites in the summer, so this will be a lifelong bond.

This was the end of another tweet to me, and the too was not actually a single word, but the end of the word “tattoo,” in response to a baby picture of me covered in paint. This is especially subtweety, since my mom is against tattoos and has kept me from getting inked by the sheer force of Jewish mom guilt.

day… Perfect gift for a mom who lives far away!!!!😊

I can’t figure out why my mom writes half a tweet, then moves on to another tweet before the 140-character limit is up. This is another instance of half a tweet, which was also very sassy. She was telling me she would get me a GPS watch because I was getting lost a lot. Also clearly a subtweet about how I live across the country and am a bad daughter for not living down the street like my brother. Jewish mother guilt to the max.

I'm up FaceTime me

I had insomnia, and tweeted about it, and instead of just calling or texting me, my mom told the whole world to FaceTime her. I mean, who knows if she really wanted me to talk to her, or just wanted to mention that she was up and looking for someone to talk to—but not me. How rude.

need to find a permanent partner so quickly!!

This was the middle part of a great tweet from my mom reviewing Younger, one of her favorite TV shows. The tweet after, she manages to @ me correctly and remark that she’s glad she has Facebook for longer writing. It’s a pretty great. When she does remember to @ me, it often doesn’t make any more sense than the deluge of accidental subtweets.

This is clearly supposed to relate to a previous tweet, but I seriously have no idea what she’s trying to say. I think she’s subtweeting herself here, since I’m not a parent.

My mom gave me my name, so she should be able to remember what it looks like. Seems even shadier to misspell it. She’s referring to a cryptic tweet of mine, so it’s a subtweet about me being cryptic, which is itself so cryptic that she misnames me, which is really next-level shit. Hats off to you, mom.

I have no idea what’s happening here.

Really. No clue. Probably a commentary on my abundance of hashtags. So harsh.

The subtweeting actually goes back to 2010, when I first set her up on Twitter. For example:

Yup that how we roll

She even tried to engage my old handle in artsy style, using AT instead of @.

Sometimes my mom used the system to get real info out of me.

What's your fl number so I can use my delta app

Also, here are some subtweets I am including just to show you my mom is actually the nicest.

own version of dolly Rae … It would not have been half ad wonderful as the real thing.. Everyday u amaze me even more … And I love u too

Here’s a series of my mom sending single letters, which maybe unscrambles into a secret message?  Is my mom’s twitter an elaborate performance piece like @horse_ebooks?