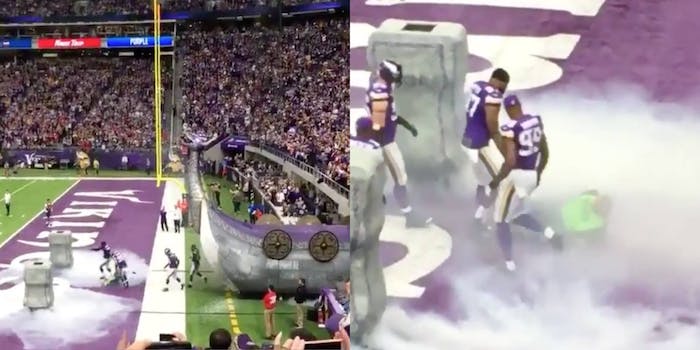 A hapless sound guy on a mission collided with the Minnesota Vikings on Sunday morning. No, parab operator Bernie Beaudry wasn’t trying out for the NFL. He was simply trying to do his job just as players were rushing the warship-themed entrance tunnel and heading to the field.

Sound guy gets destroyed by the team entering the stadium (Vikings)

Luckily, Beaudry and his trusty parabolic reflector are fine. “It was the stupidest thing in 20 years doing this job. I only saw the smoke. I didn’t see anybody coming, and then, boom!” the veteran production worker told TwinCities.com following the game.

And the players who ran into him? Why, they’re just peachy. Linemen Brian Robison and Linval Joseph not only anchored a dominating Vikings defense but are definitely looking out for Beaudry. They and the rest of the team will be autographing a photo of the pregame sack and giving it to Beaudry when Minnesota returns to U.S. Bank Stadium to play the Dallas Cowboys on Dec. 1.