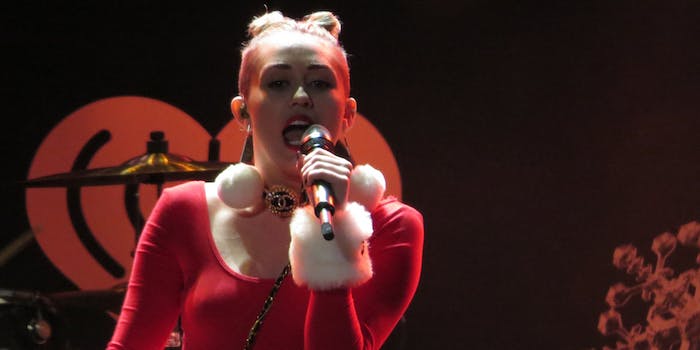 Miley Cyrus may have thought her quip about drugging partners’ drinks was cute or shocking, but it was just stupid.

Miley Cyrus has an almost compulsive need to shock and amaze at each of her shows, and Friday’s show at GAY in London was no exception. Being the creative genius she is, Cyrus realized that GAY is a gay club primarily composed of gay men and brought a number of blow-up phalli onstage to remind the crowd that they all appreciate a good (if giant) dick. She also did her usual wear-a-leotard-and-twerk routine, which is more a tired dance trope than anything at this point.

But Miley’s show actually crossed the rubicon between mildly offensive and not just because she (once again) used little people as props. Without being prompted, Miley spewed the following rant about “being gay” while offering her straight-dude friend a penis-shaped birthday cake. It quickly turned from a cutesy bit on “everyone’s a little bit gay” to an incredibly rapey mental image.

He’s straight but I said that for years too, and finally it gets easier. You know, everyone’s a little bit gay. Some of us just a little bit more than others. You know, it’s the truth. Everyone’s gay. All it takes is one cocktail. And if that doesn’t work, sprinkle something in their drink. That’s what I always do.

I still can’t decide if the first part of Miley’s statement is just playing to her audience (since she was at the biggest gay club in London) or if she’s trying to fan the flames of the old “Miley’s bi!” rumors, but either way it was reductive, but not heinously offensive. And this isn’t the first time that a straight-as-far-as-we-know female pop singer has done something unnecessarily off-putting at GAY: Lily Allen dressed up in “Beyonce drag” at a show there in April, enraging more fans than she placated with her Bey-hating act.

Her joke about “sprinkl[ing] something in their drink,” though, was tasteless and hurtful. Miley probably doesn’t know this, but a recent review of US studies conducted between 1989 and 2009 found that 43 percent of lesbian, gay, and bi-identified women reported some kind of sexual assault in their lifetime, and 30 percent of gay or bi-identified men. And a review of trans studies in the US showed that half of trans-identified people have been sexually assaulted in their lifetime.

Although UK LGBTQ rape statistics are a little harder to come by, since the most widely-publicized stats focus on hate crimes instead of intimate partner violence, it isn’t too big of a stretch to assume that the British queer community has many of the same problems, since one in eight lesbian and gay people have experienced hate crime sexual assault, compared to one in five bi people.

Miley Cyrus may have thought her quip about drugging partners’ drinks was cute or shocking, but it was just stupid. More likely than not, a small but brave contingent of her audience were sexual assault survivors, and some could have been the victims of date-rape drugs like alcohol and the myriad of drugs rapists can “sprinkle” in it.

If she really wants to please her fans, Miley needs to stop trying to be shocking and grow up.