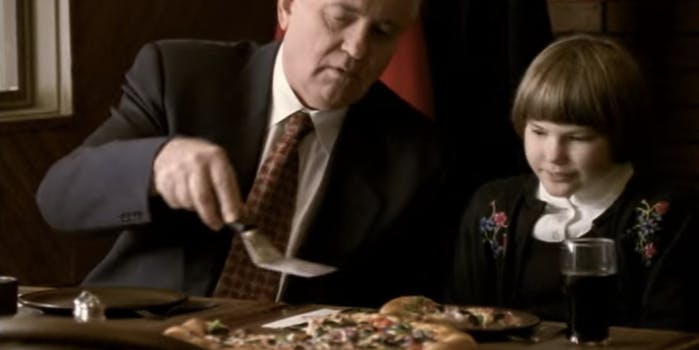 That time Mikhail Gorbachev was in a Pizza Hut commercial

Former Soviet leader Mikhail Gorbachev might be best-known for his policies of glasnost and perestroika—or openness and restructuring—often credited with contributing to the end of the Cold War and the toppling of much of the Soviet Bloc.

But in 1997, six years after the end of his time in office, he starred in a cheesy ad promoting Pizza Hut.

The BBDO-produced advertisement opens with the former head of state and his 10-year-old granddaughter, Anastasia, on their way to a Moscow Pizza Hut. Gorbachev’s presence inside the restaurant prompts customers to argue (in Russian, with English subtitles) about his economic legacy.

But when a wise older woman points out that they’re all currently enjoying Pizza Hut thanks to the one-time General Secretary of the Communist party, even the stodgy old central planning apologist ultimately comes around, standing up and raising his slice in a toast “to Gorbachev!”

That any former world leader would appear in a television commercial for a multinational corporation is weird enough. Imagine Helmut Kohl claiming that the Burger King Whopper facilitated German reunification, or if George W. Bush popped up in a Taco Bell ad to tell viewers that Doritos Locos Tacos are hotter than Fallujah in 2004.

But to have the head of the Soviet Union shilling for one of the most visible manifestations of multinational capitalism is a strange irony indeed.

In an interview, Gorbachev seemed cavalier about how the Pizza Hut ad would affect his reputation.

”I thought that it is a people’ s matter—food,” he told New York Times reporter Alessandra Stanley in 1997. ”This is why if my name works for the benefit of consumers, to hell with it—I can risk it.”

Gorbachev told the paper that while he didn’t know exactly how much he was being compensated for the cameo, all of the money was going to his eponymous NGO.

The only thing stranger than the ad itself is the fact that it hasn’t yet been dug up for internet mockery. To date, the video has only been viewed on YouTube some 300,000 times. But it’s so bizarre that you might need to watch it twice yourself.