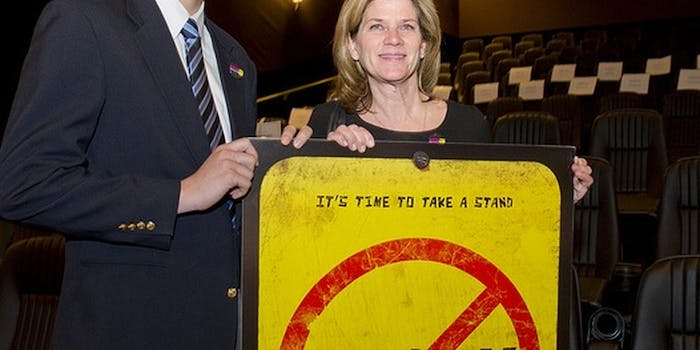 When a middle schooler was bullied on Facebook, she took the drastic step of hitting two classmates with a libel lawsuit.

Alex Boston, a 14-year-old from Acworth, Georgia, discovered a Facebook page set up in her name around a year ago, according to The Associated Press.

The profile suggested that she was sexually active, racist and involved in drugs. The account was used to leave obscene messages on her friends’ profiles, while an unflattering doctored image of her served as the profile photo.

“I was upset that my friends would turn on me like that,” Boston, who agreed to be named to raise cyberbullying awareness, told the AP. “I was crying. It was hard to go to school the next day.”

The upset teen told her parents about the bogus profile. They complained to officials at Palmer Middle School and filed a report with the Cobb County Police. However, the family was told that there wasn’t much the authorities could do, since the incident occurred off-campus.

While almost every state has laws or policies regarding cyberbullying, few of those measures cover incidents that take place outside of school property. In fact, just seven states have added off-campus harassment measures to bullying laws in recent years.

“At the time this report was taken in May 2011, we were not aware of any cyberbullying law on the books that would take her specific situation and apply it to Georgia law,” a Cobb County police spokesman told the Associated Press.

Instead, the family was advised to take up the issue with Facebook. Yet it took until last week, when the lawsuit was filed, for Facebook to take down the offending profile.

Facebook has measures in place to report cyberbullying, while a new Support Dashboard lets users see how reports of offending content are progressing.

The Boston family has started a petition to strengthen Georgia’s bullying law. The lawsuit against Boston’s classmates seeks unspecified damages and a jury trial.

U.S. federal courts are struggling with the issue of whether taking action against teens who cyberbully others off campus is a healthy step forward, or if taking such measures violates the bullies’ First Amendment rights.

Back in 2005, a student in Pennsylvania was suspended for creating a Myspace parody account suggesting his prinicipal smoked marijuana and stored beer on school grounds. That suspension was overturned by a federal judge, who ruled the incident hadn’t disrupted the school year.

On the other hand, a student in West Virginia was suspended for creating a website claiming another student had a sexually transmitted disease in 2005. A federal appeals court upheld the suspension, dismissing the student’s argument that the school shouldn’t sanction her since she created the site off school property.

The rules for cyberbullying not only vary from state-to-state and judge-to-judge, but also depending on the country in which the offending actions took place.

Earlier this month, four college students in Ireland were suspended after harassing three teachers on Facebook.