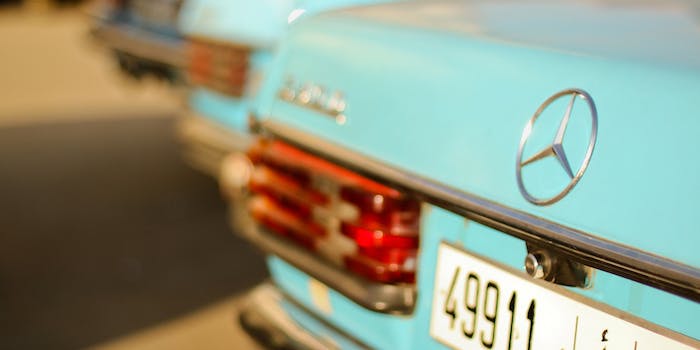 Mercedes owner gets his comeuppance for this lousy parking job

Facebook is the last place you should complain about someone's parking.

Next time you think of complaining about someone parking a little too close to your wheels, it’s best to not do it on Facebook. Especially when you’re the one who parked like an idiot in the hope that no one would get close to that beautiful Mercedes.

The douchiest driver on all of social media learned this lesson the hard way after he freaked out over a Volvo parking a few inches too close to his ride.

“Who the hell parks next to a Mercedes like this???” Mark wrote on Facebook. “Leave your shit box away from me buddy!!!”

Then he admits he’s the one at fault here. “I was like well if I park on the line who is going to try to park in this tiny spot. … Fail… I know.” But he blames the Volvo owner, who actually parked perfectly, for being jealous of his Mercedes. “Yeah, park near a nice car because you don’t like the fact you don’t have one.”

“Looks like a 2001 E-Class… maybe? Worth $2,000-$5,000,” checkmarshall commented. “Sure, it’s a Mercedes, and yes, people should have pride in their cars and do their best to take care of them regardless of what it costs… But he is acting as if He’s rolling around in something worth 10+ times as much.”

Mark also felt the full wrath of the Facebook community. Pop some popcorn and take a look.