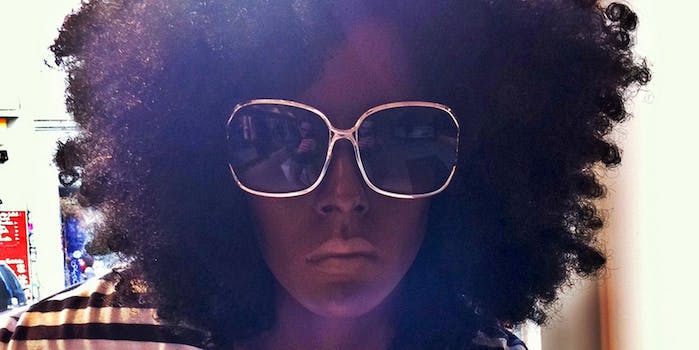 What a hashtag says about journalism’s ongoing race problem

#HowMediaWritesWOC took on racism in journalism with a bang.

As a woman of color media maker, I was definitely intrigued—how are media outlets writing about women of color? How are they not? How can I, as one of these people who writes about issues facing women of color, do better?

Claudia Stellar of the Chicago Taskforce on Violence Against Girls and Young Women tweeted that she and others started #HowMediaWritesWOC as a follow-up to the #DecolonizeDVAM conversation and as a way to prioritize the voices of women of color and trans women of color. By now, over 15,000 tweets have been written using the hasthag.

For instance, throughout the day (and even into the days that followed), various tweets pointed to a picture comparing two moms breastfeeding during their college graduation ceremony. Both were in cap and gown. Both were smiling. Both held their baby to their bared breast. But the photos were accompanied by very different headlines:

Reproductive justice expert Dorothy Roberts chimed in on the conversation, pointing out that media often fails to portray the love and connection between black mothers and their children, a perception that then supports the idea of them being unfit mothers:

Another popular tweet pointed out the whitewashing of Harry Potter. Yes, Harry Potter, that story of the boy wizard who saves England (and the rest of the world). In the first three Harry Potter films, black actresses play the character of Lavender Brown. Her role is very small in those films—she doesn’t even have a speaking part—but when she becomes a significant love interest in the sixth film, the film producers replaced her with white actress Jessie Cave.

Was it magic? Or was it the fear that showing a black girl’s first schoolgirl crush would turn off fans? And, in a world populated by wizards, witches, and giant talking spiders, why would interracial romance be less plausible?

When I saw the tweet, I had to look up who Misty Upham was. For those who also don’t know, Misty Upham appeared in 2008 film Frozen River and was nominated for an Independent Spirit Award for Best Supporting Female. In 2013, she appeared in Jimmy P: Psychotherapy of a Plains Indian. She disappeared after leaving her sister’s home one night on foot. One week later, her family announced that no one had heard from her and that, although they had contacted the police department, she was not deemed a “missing person.” Her family and other community members organized a search party and found her body on October 16, 2014, eleven days after she had disappeared.

True, Jennifer Lawrence is much more well-known, but the fact that Upham’s death barely made a ripple in headlines, even with the added conflict between her family and the local police department, should say something about media’s treatment of women of color. Why doesn’t the disappearance and death of Native women merit news? Is it because there are so many of them, as the Save Wiyabi Project pointed out? The Save Wiyabi Project even created a map of all of the unsolved disappearances (as well as the solved and unsolved murders) of Native women in the United States and Canada. The numbers are frightening. Then, when you think about it, the media silence is even more frightening.

When media does report on the murders of women of color, they are often portrayed in their least favorable light. For instance, when the bodies of 18-year-old Tjhisha Ball and 19-year-old Angelia Mangum were found naked, tied by zip ties and heaped on top of each other, local media reported it this way:

Media outlets stressed that both women had previous arrests and, in some cases, used their mug shots to introduce the two women to viewers. Since their previous arrests presumably had nothing to do with their grisly murders, it’s the same vein as the New York Times piece in which the writer stated that Michael Brown was “no angel,” as if that had anything to do with his murder. The New York Times comment inspired a Twitter storm with hashtags like #notanangel and #iftheygunnedmedown, with people of color asking what picture would run in the paper if they were shot by police.

#HowMediaWritesWOC was a thought-provoking exchange of ideas. It made me pause and reflect how I report (or sometimes don’t report) about women of color. While it may not hold answers to every single question about how media should write women of color, it does open a dialogue. Claudia Stellar also provided a few resources, such as how to report sexual assault (and do it well) as well as ways to shift from carceral feminism to transformative justice.

Victoria Law is a freelance editor and writer. She frequently writes about intersections of incarceration, gender and resistance. She enjoys reading dystopic fiction to escape the realities of the U.S. prison system. This post originally appeared on Bitch Media, and has been reprinted with permission.