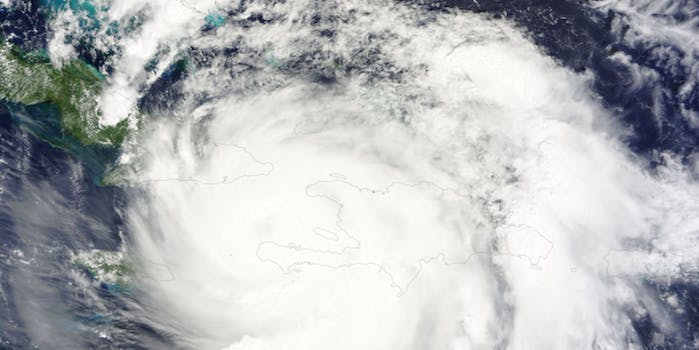 With Florida in a state of emergency over the approach of Hurricane Matthew, which had already claimed dozens of lives in the Caribbean, a different Matthew—King, to be exact—had a bright idea for how to help.

“I mainly use Twitter to make jokes,” he told the Daily Dot, “but [Wednesday] night I noticed #HurricaneMatthew trending and thought, ‘Huh. That’s funny. That’s my name. But wait. This isn’t funny at all. People are losing their homes. People have lost their lives. I should do something.'”

Naturally, that meant rounding up all of the Matthews that the Vine comedy star knew for a group fundraising effort to benefit UNICEF’s hurricane relief efforts.

didn't want to joke about #HurricaneMatthew so i put all my FB friends named Matt into a group chat and invited them to join me in donating pic.twitter.com/5T53AehKhA 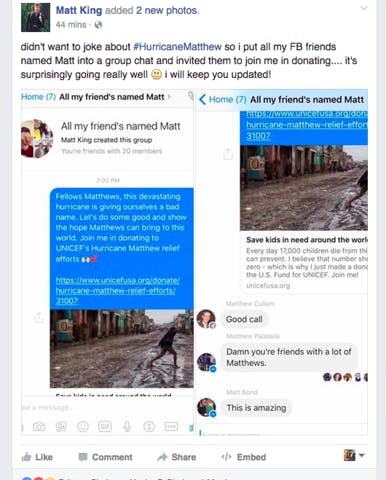 “After all,” King pointed out, “it’s the 40th most popular name in the U.S., over 1 million people are named Matthew. Surely we could make a difference in light of this devastating hurricane giving our name a bad rep.”

And he was right. King’s group of Matthews quickly pulled in more than $100 collectively, and in turn spawned tons of other Facebook threads with different groups of Matthews, all dedicated to the noble cause. The original tweet amassed more than 100,000 impressions in less than a day.

“We’re now calling it #MatthewsGiveForMatthew,” King said, adding that he was encouraging other Matthews to combine forces (and non-Matthews to donate as well). “It’s quite amusing when you share the same name as a hurricane, but it’s even more amusing to see how other people with same name are more likely to donate to the relief fund simply because of the coincidence.”

It seem to have had an effect.

The initial success of #MatthewsGiveForMatthew has King wondering if something along these lines could be arranged for every major storm that comes ashore with a name. “I want to see if this ‘name-focused’ tactic of collecting donations for future hurricane relief funds will work in the future,” King said. “As the old High School Musical saying goes, ‘This could be the start of something new.'”

It may be too late for the Irenes and Sandys of the nation, but if we get another hurricane with a name about as popular as Matthew—a Christopher, or Jason, or Samantha, or Elizabeth—they’ll be called upon to swiftly rally for the greater good.