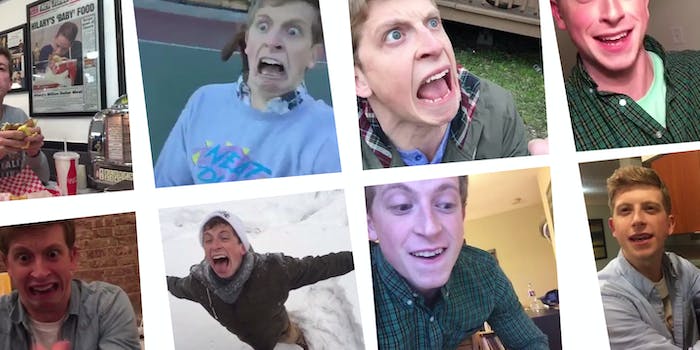 What did Vine do to Matt King’s life?

Matt King and the Beyoncé loops that never stop.

Nearly a year ago Matt King and his brother Kevin sat in bumper-to-bumper traffic headed home from college for the weekend. They were bored out of their minds—Matt decided to video himself with his iPhone lip-syncing to Beyoncé’s “Love on Top.” He had a Vine account, and it’d kill time for six seconds.

“I had no clue what I was doing. I remember looking at it after I made it, showing Kevin and thinking ‘this is stupid,'” King says.

Kevin told him to post it. His little brother’s intuition has never been so on point.

Somehow, the “Love on Top” vine has yet to lose its hilarity nearly a year later thanks to that miserable car ride. In fact, it is the fourth-most shared vine of all time.

Understandably so: Not all humans are capable of the faces Matt can make.

These days King has over 550,000 Vine followers. It’s a spike in fame as tangible as it is sudden.

During the fall semester of his final year studying advertising at the University of Texas at Austin, King was simply an observer on Vine. He shared personal favorites but never produced original clips. As 2013 came to a close Matt and Kevin reflected on the year.

“I’m going to start putting myself out there on the net, just a little bit more and see what happens,” Matt said.

Sitting barefoot on a park bench in Austin, Texas, King says the past year has been a whirlwind and he never expected to get here. He lives in Los Angeles and makes a living cranking out silly, six-second clips.

The South by Southwest conference has brought King to Austin, where he assisted in content creation for the Inbox Messenger app. He’s back in his college town on corporate dimes.

His newfound fame is transferring across platforms from Vine to Twitter, Instagram, and Snapchat. He runs in high-profile circles of like-minded creatives.

During his final semester, amid the stress of exams and job applications, King would turn to the Dream Girls soundtrack for companionship. That mostly forgotten, 9-year-old work came to be the beginning of his Vine presence. Six seconds of lip-syncing with the Dream Girls—doing goofy facials—gained King nearly 5,000 quick followers on his express lane to Web stardom. “Love on Top” set things flying.

When a Twitter account, Tweet Like a Girl, shared the vine with the caption “if you need a good laugh pause this vine at random times,” the favorites, followers, and loops began to multiply.

Not too long after the initial post, BuzzFeed compiled a list of screenshots of the many faces of King. Every second is hilariously awesome. 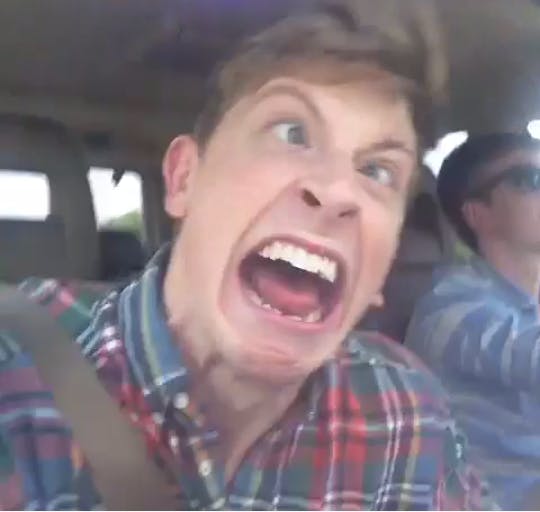 King quickly amassed 30,000 followers. He was in a state of shock.

“It kept me up at night,” King says, “What’s the next vine I’m going to make after this? Am I ever going to top ‘Love on Top?'”

Right at the time his Vine account was gaining its impressive following King landed a job in Los Angeles working for Apple as an assistant account executive. Shortly after walking the graduation stage he made the trek from Texas to California to pursue a professional career.

“It was hard balancing out this double life with social media and creating consistent content for followers, while having to devote 110 percent of my mind to account management,” King says.

As his followers continued to multiply, he was receiving offers to attend events, be part of YouTube series, and audition for a variety of outlets. Less than a year into his Apple tenure, King realized the work-Vine balance was impossible to manage.

By doing promoted vines and selling ad space on his YouTube channel, King realized he could generate enough revenue to skate by and chase a dream. So, he is.

Soon after he left his job with Apple, King was flown to Playlist Live in Orlando, Fla., a conference and party for online content creators. While there, King was offered a job with NeoReach, where he is now responsible for trafficking Vine users to branded campaigns—criss-crossing the country and filming vines in the process.

King always saw the Vine community as a burgeoning creative scene. With a desire to collaborate and mold it into a tangible IRL monster, King did what any 21-year-old social media guru would do and searched “#Texasviners.” He came across several local guys and gals to follow and cyber-flirt with.

Fellow Texas viner Jacob Ladin Moore invited King to get together for mini golf in Austin with some of his Internet buddies. They sparked weird, funny clips.

“They really opened my mind and my heart to what the app means to people,” King says.

And while playing Peter Pan mini one of the guys looked King up on Rankzoo.com, which tabs Vine users stats, showed King his climbing success, and relayed findings: “Woah, you’re blowing up fast right now.” Ever since King has been one of the top 1,000 Vine personalities—No. 465 at the moment.

Once King made the move to L.A. he was able to meet a new crop of fellow vine users he’d been an active fan of. A huge, unrepentant smile comes across his face when he recalls popular viners telling him they are huge fans of his.

“It was so hard not to be a fanboy,” King says.

“I think it’s important to be living with people who are on your same wave length, ’cause it’s kind of hard making a vine in your kitchen when your two roommates who aren’t viners are looking at you weird,” King says. “It’s this shared sense of insanity, we all have been on this app and have these crazy, wild stories of meeting each other.”

At the outset, his rapidly growing fanbase driven by teenage girls. He admits attention from girls who aren’t old enough to drive can be strange. But King soon realized that “they’re young fangirls but as silly as they can be they’re some of the most supportive people ever. They keep me going.”

His videos are largely slapstick, lip-syncing snippets anyway. He says the silly faces transcend ages and languages, hence his fame. King didn’t see this wave coming, but he loves that he can make thousands of people laugh on a daily basis by simply being himself.

“I hope everyone on social media can get along like we used to in middle school, bake a cake filled with rainbows and smiles and everyone would eat and be happy,” King says seriously but while quoting an old Mean Girls line.

While the Vine culture has become widely known for taking niche and viral jokes from urban, predominantly African-American youth culture, King has done his best to stray from that path.

He avoids co-opting those viral Vine jokes because he stresses that he has more fun creating his own original content, rather than robbing others of their creativity.

“I’ve been fortunate enough to surround myself with a very supportive group of diverse and talented viners, who for the most part are pretty apathetic when it comes to ripping off other people’s jokes,” King says.

And while he wishes he could say the same about the rest of the viral Vine community, he recognizes everyone has their own approach to this frontier. So he’s going to keep listening to Beyoncé and warping his elastic face: “All I know is something beautiful is happening and I’m eager to keep chasing these vibes.”