How to master that final panel: An interview with comic artist Matt Lubchansky

That single frame can get readers doubling over in laughter or scratching their heads in confusion.

Webcomic artist Matt Lubchansky is the master of the final panel, that single frame that can get readers doubling over in laughter or scratching their heads in confusion.

Lubchansky honed this comic talent as a child who pored over “crappy newspaper comics,” no matter the content. He had ideas for characters and worlds that he wanted to create, but no medium to distribute them with. Several years later, thanks to the Internet, he produced comics while in engineering school “for something a lot more practical.”

In 2009, Lubchansky started his first comic, The Adam!, which chronicled the life of Earth’s first nonfiction superhero. His second, Please Listen to Me, was a hub for his work that didn’t fit in that fictional world. 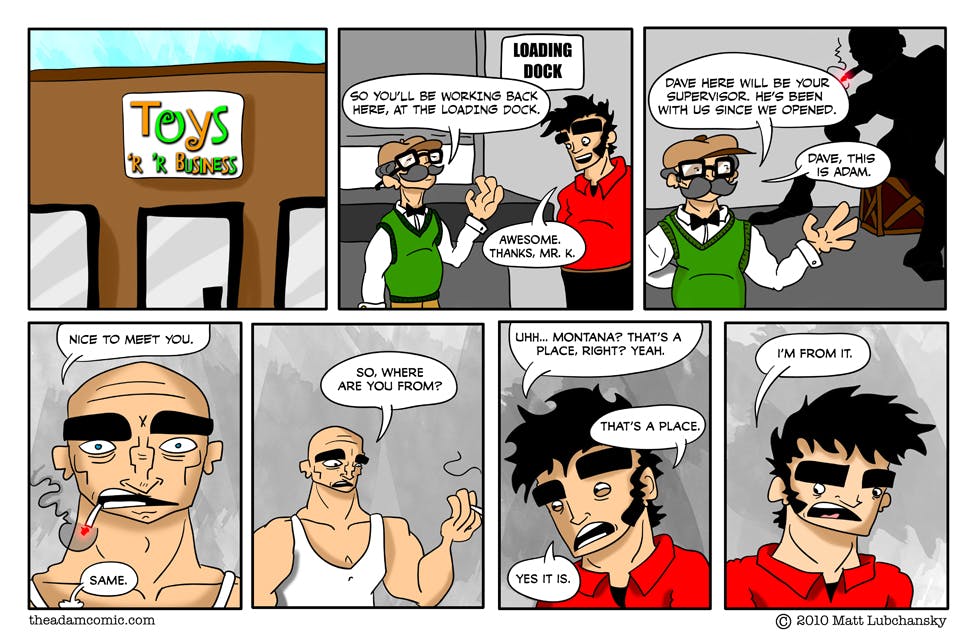 One of the projects Lubchansky has started is Dad Magazine which he co-writes with his wife, Jaya Saxena, a writer and Daily Dot contributor. In September, Lubchansky became an editorial assistant at the Nib, a webcomic network hosted on Medium. 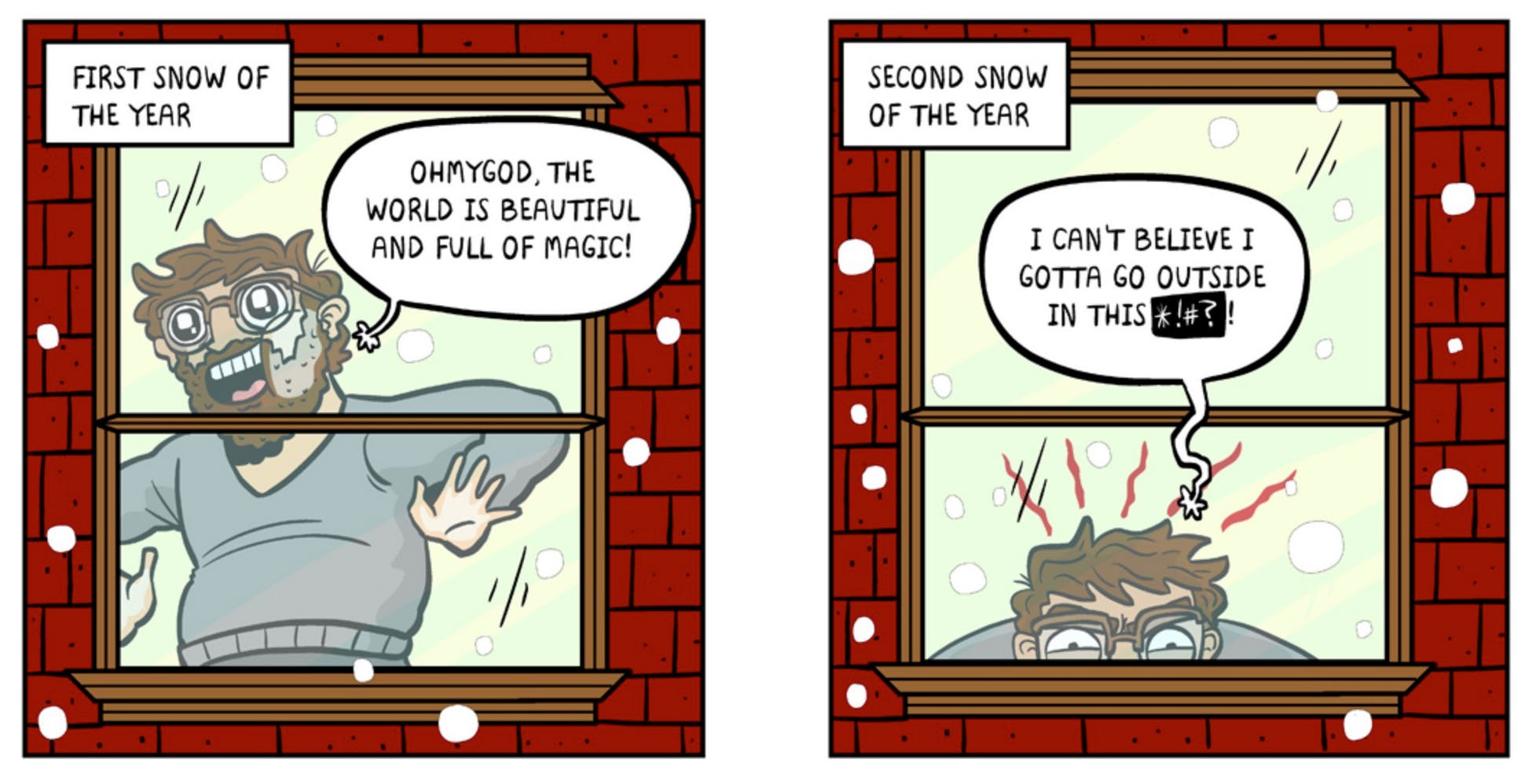 We asked Lubchansky about his comics, where he gets his inspiration, and drawing blowhards in trash cans. Read the full interview below.

How did you get into comics? Was creating them something you got into at a young age?

I basically couldn’t get enough of really crappy newspaper comics as a kid—I would read everything pretty indiscriminately. My tastes got much different as I got older. I always remember doodling a lot when I was really young. I spent a lot of time coming up with very elaborate proposals for newspaper-style strips—characters and settings and everything—and then never doing anything with them. I remember when I first started seeing webcomics in the late ’90s, I was really excited by the concept of being able to do whatever I wanted. I decided that I would definitely start doing comics online as soon as I could, so naturally I waited like 12 years to do it.

“I was really excited by the concept of being able to do whatever I wanted.”

It was kind of daunting! It didn’t seem like being a cartoonist was a thing I could actually do so I ended up going to college for something a lot more practical. I kept making comics, though, in my spare time and  got rejected from being the cartoonist at my college’s free paper which set me back again. After a year or two at a desk job, I figured out I wasn’t gonna be happy doing anything else and spent basically every free minute I had making comics. I started working the first comic that ran regularly online, The Adam!, in 2009 and just kept going from there.

Where do you get your inspiration from?

This a tough one. If I had an answer, it would definitely be a lot easier to write jokes because I could just keep going there. It really depends on the sort of comic I’m writing. If it’s a story or something I work on, that looks a lot like me staring at a screen and just writing anything that comes to mind until something is useful. If it’s something topical, it’s a little easier to dick around online all day and see if anything makes me upset (a thing that will inevitably happen). If it’s something goofy, those ideas tend to either come out of nowhere or after I’ve been drilling down on a simple concept for way too long. A lot of the comics I’m most proud of tend to be about the certain way people act in situations, or specific types of feelings I have that take basically months of thinking about them until I can distill them into four or six panels. 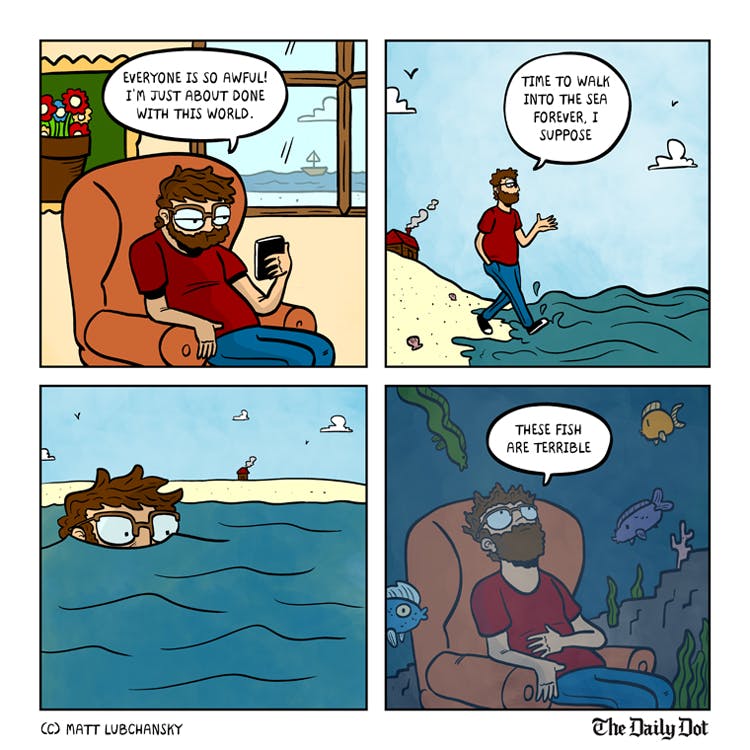 Is there a particular comic that you’re proud of, or that has gotten more attention that you expected? If so, can you talk more about the the story behind that comic?

It’s interesting because in my experience, those two things don’t line up quite exactly as the same work. I think if you talk to any cartoonist or someone that works online you’ll find that. Before the things I’ve done that have been popular I’ve thought that it could do really well, but you never know how people are gonna react. I just do the best work that I can and hope for the best. None of the work that I’ve done that gets popular has any sort of special story, really. I’ve just tended to approach everything in the same way and if people have a big reaction that’s always great. I’m most proud of work when I can look at a comic I’ve done and really feel like it looks the closest to how it looks in my head and conveys the actual feeling behind what the joke is well without a ton of room for interpretation. Even when something is super-goofy, I’m generally trying to say something, either about the world or something that I find about myself.

“Even when something is super-goofy, I’m generally trying to say something, either about the world or something that I find about myself.”

I noticed that you do illustrations/comics that are topical, like this one. How do you approach news and current events with your comics?

It’s really great. I love working with [editor] Matt Bors and [associate editor] Eleri Harris. We’re scattered all over—I’m in NYC, Matt is on the West Coast, and Eleri is in Australia—but I just got back from the three of us working in the same office for a week and they’re great to work with and wonderful people on top of that. We’ve got some really exciting stuff on the horizon, but I really love being able to work with all these great cartoonists. It’s kind of a dream come true so far. It’s been wonderful being able to commission comics about stuff that I care about, or even just being able to reach out to people I admire to do work for us. It’s a really unique place on the Web or even any other place right now—we get to run work that we’re proud of and also the artists get very fairly compensated, which is rare for comics and especially editorial comics right now. We run some really incredible longform stuff that you just don’t see anywhere else and I’m really just flattered to be involved.

One of the most rewarding things has been working with editors when I do my own work for the site, though. I’ve never really had editors or really any other input while writing, except running my ideas by my wife who is eternally patient with my very dumb jokes and also very good at running into the office and posing when I need a live figure for something. I think it’s made the work that I run on the Nib some of my strongest stuff to date.

Do you feel like anything has changed in the world of comics since the Charlie Hebdo tragedy? Has it inspired your content in any way?

I can’t say that it’s inspired my content in any way. It obviously hit a little close to home when I first heard the news because it was a bunch of cartoonists getting gunned down. But the more I thought about it, it’s almost like asking people who work in high-rise office towers if they approach how they do their work differently day-to-day in the wake of 9/11. It’s natural I think to try and contextualize or even intellectualize stuff like this when it happens, but it’s mostly just a senseless thing that happened. If there’s been a change in comics, I don’t think I’ve really noticed anything sweeping.

Are comics and illustrations a hobby or a full-time job? If just a hobby, what are you by day?

Right now, I’m working freelance as an editorial assistant at the Nib, and filling in the rest of the time with freelance illustration and my Patreon page, which is linked to the (currently) weekly comic I work on, Please Listen to Me. I also do some other things like Dad Magazine for the Toast with my wife—we’re actually working on a book for Quirk Books right now that will be out sometime early next year.