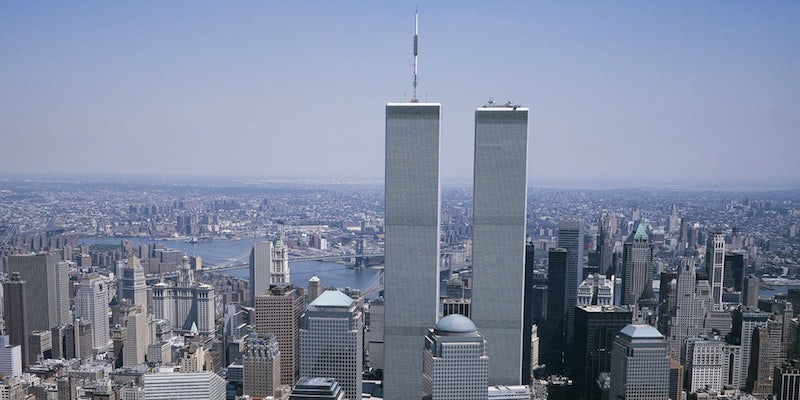 Newspapers and pop culture websites recently rolled their eyes at the prospect of a new movie depicting the events of Sept. 11, 2001.

It isn’t that the subject itself is still a cultural taboo—although most films released since have depicted America’s military response to this pivotal moment in global history, not so much the actual tragedy. What was most fascinating about the aptly titled Nine Eleven, if maybe a little odd, were the stars reportedly attached to the film, Charlie Sheen and Whoopi Goldberg—and the fact that they’d be trapped in an elevator together.

Some outlets’ immediate response to the film dismissed the notion that a film about the September 11 terrorists attacks starring Sheen and Goldberg could, in fact, be legitimate. Death & Taxes speculated that the film was a “bogus” “Sharknado-style… TV movie.” AV Club quipped that the movie was “constructed during a particularly idiosyncratic game of Mad Libs.” The New York Times’ report questioned the viability of the film based on the under-the-radar filmography of writer-director Martin Guigui, as well as their unsuccessful attempts to contact representatives from his production company, Sunset Pictures.

Not to mention, Sheen’s reputation as a September 11 “truther” played a role in the skepticism from pop media. But regardless of Sheen’s personal beliefs, Guigui explained in an interview with the Daily Dot, Nine Eleven doesn’t aim to be a polemical film, and it’s definitely not telling the story of a government cover-up.

Nine Eleven is an adaptation of the Patrick Carson play, Elevator, co-written by Guigui and Steven Golebiowski. It tells the story of five people trapped in an elevator inside the World Trade Center during the September 11 attacks, and their efforts to survive. Cast alongside Sheen and Goldberg are other well-known actors Luis Guzman (Boogie Nights), Wood Harris (The Wire), and Gina Gershon (Face/Off). (Although Gershon doesn’t appear on the film’s IMDB page, a representative confirmed her role.)

“It’s a very positive inspirational story, and it’s being told… with utmost respect to the September 11 community,” Guigui said.

Guigui described Nine Eleven as a passion project for himself, as well as the actors involved. And that personal connection to the material echoes in statements from Sheen and one of the film’s producers, Dahlia Waingort.

“[Sheen’s] dedication to the script and to the role is really second to none,” Waingort told The Daily Dot. “He wants to show the general public that this is an important acting piece and an important story that he wants to tell firsthand. The dedication is palpable.”

“I feel deeply connected to the material and I’m so excited to be working with my dear friend Whoopi Goldberg,” Sheen, who announced he was HIV-positive in November, said in a statement to Variety.

Waingort added that Sheen is approaching this performance as a reprisal of Bud Fox, his character in Wall Street. Guigui said he wrote the character with Sheen in mind and described Nine Eleven as a return to form for the controversial actor.

“In a way [this performance is] a return to his cinematic status, when back in the day he was doing Platoon, Wall Street, and Eight Men Out,” said Guigui, describing Sheen as “clean and sober.”

Waingort could not disclose the budget specifics at this time, but Guigui described it as an “independent spirit type” of movie. Waingort added that the producers’ partnerships with the actors, production studio, and visual effects team allows them to work cost-effectively. It helps that much of the film takes place inside of an elevator.

The apparent mystery of Sunset Pictures, run by husband and wife team Guigui and Waingort, resulted in mild derision from the media when the story of Nine Eleven broke. Perhaps the film easiest to identify credited to Sunset is Guigui’s first: My Ex-Girlfriend’s Wedding Reception. A scene from the 1999 film, featuring then-Congressman Bernie Sanders as a Rabbi Manny Schewitz, went viral in February.

The few feature films directed by Guigui and produced under this banner since then had little commercial success. The only film the Times found with box office numbers was the 2004 fantasy Swing, which only grossed $2,509, according to Box Office Mojo. A 2015 boxing biopic, The Bronx Bull, hadn’t appeared to make it to DVD at all.

Waingort confirmed that the latter film was not available on DVD, but only because it had not yet been released in theaters. The Bronx Bull, which depicts the life of boxer Jake LaMotta (of Raging Bull fame), is set for a Fall 2016 release from eOne—the distributor of Trumbo, Spotlight, and 12 Years a Slave, among many others.

Where Sunset Pictures has been particularly successful, Waingort said, is in the documentary realm. They served as consultants for the 2013 documentary Blackfish. Currently, Ebola Fighter: Hero with a Thousand Faces is garnering favorable attention in the festival circuit, according to Waingort.

“We’ve had a certain level of films that had gotten made. It’s a miracle that anything had gotten made,” Waingort said, speaking to the overwhelming difficulty of making a film. “Our investors have stuck by us and they believe that they will succeed in a big way.”

“We’ve got a contender on our hands,” she added—a statement that could be just as true for Nine Eleven as it is for Charlie Sheen.

“I think that you could look at Mickey Rourke in The Wrestler or Robert Downey Jr. in Iron Man,” Guigui added, praising Sheen’s performance and dedication to the project. “It’s all about your purpose and what you’re here to do. His purpose is, you know, he’s a great actor and he’s a great person. …It’s a legacy piece.”

Nine Eleven is slated for a September 2016 release at the Toronto Film Festival.