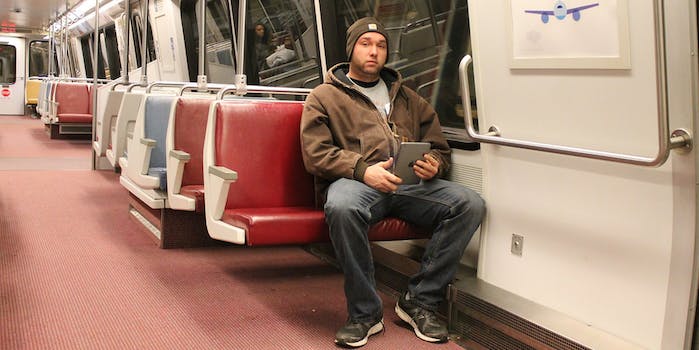 Dudes of public transportation, please close your legs—no one wants to see your balls

It's the male privilege, stupid.

The MTA’s newly released stance against manspreading—the male tendency to take up as many subway seats as possible—is infuriating Toronto men’s rights activists, who think it’s fine as long as the train is empty; meanwhile, women (and some men) who have been complaining about the problem for years. Given that this has been an established subway foul since at least the 1940s, it’s legitimate to wonder if this will finally be the campaign that gets men to keep their legs together like everyone else on the subway. Unfortunately, the answer is “probably not.”

The MTA certainly hopes so, though, with courtesy notices it plans to post across the system, pleading with riders to make a little room for each other on increasingly crowded trains. 6.1 million people ride New York’s trains on any given day; while a decade ago, 5.1 million took the train on the busiest of days. However, the failure of multiple campaigns along similar lines, let alone the tide of complaints from women, including the pointed “Men Taking Up Too Much Space on the Train” Tumblr, suggest that we shouldn’t be relishing the prospect of additional subway seats anytime soon. Put bluntly, manspreaders just don’t care.

While the media has been billing the latest MTA courtesy campaign as one focusing on manspreading—perhaps so they can relish the opportunity to use the word as much as possible, as even the Grey Lady couldn’t resist having a go, albeit in restrained scarequotes—it actually covers a multitude of inconsiderate moves on the subway. Most of them boil down to a simple issue—namely, that a lot of people are riding the train, and that it’s important to make room for everyone for the safety and comfort of everyone. The list of dos and don’t includes a variety of unwanted behaviors, and it comes with a warning that those who disobey subway notices might just find themselves being cited for it.

As anyone who’s ridden a crowded subway train knows, space is at a premium.

As anyone who’s ridden a crowded subway train knows—or has tried to wedge onto one instead of being forced to stand on a muggy platform and wait for the next—space is at a premium. Even when the MTA runs added trains or attaches more cars to address crowding, at some periods of the day the train is standing room only. The problem is exacerbated by people—mostly men—who take up multiple seats by splaying across them or flinging their gear onto the seats next to them. But the MTA is also firing a shot across the bow of those who wear backpacks on the train, block doors, and don’t yield space at the pole.

In other words, the transit agency is tired of passengers not yielding a little space to each other, but manspreading, as the symbol of rude train behavior, has become rather iconic. It’s not just because it’s annoying for everyone on board. It’s also because it’s such a naked symbol of male privilege, reflecting the belief that men can take up as much space as they like with the expectation that people around them will accommodate them. There’s also a certain element of obliviousness to it, willful or otherwise. Some men seem genuinely unaware of the fact that other people might want to use, or at least share, the space they’re selfishly taking up.

Bustle’s Gabrielle Moss conducted an interesting experiment last summer when she decided to determine, once and for all, why men spread their legs on the subway, using the time-tested method of taking her question to the field. She spent an entire weekend sitting like a man, spreading her legs, taking up as much room as possible, and studiously ignoring those who might want to sit next to her.

I became unconscious of my own manufactured privilege. As people viewed my leg spread as an act of aggression and possible instability and steered clear of me, I slowly began to stop even noticing them. For the first time in my subway-riding life, I stopped worrying if someone was going to call me a bitch if I took up too much room. I didn’t feel powerful, per se. I just felt…relaxed. Was this what those leg-spreading men felt like all the time, I wondered? Relaxed, confident, cocky?

Her experiences, evolving over a single weekend, went from feeling “like a dick” the first time she refused to yield a seat to simply not caring about other people on the train. She was only asked to move a handful of times, and while she complied each time, she concluded, “To make any progress on this issue, we can’t demand that individuals take the lead themselves—we need a public shaming campaign undertaken by the transit system itself.” It would appear that the MTA agreed, but it’s doubtful that will be enough, because a shaming campaign assumes that men are paying attention and that they’ll respond to the prompt to yield to other riders.

Moss’ experiment may have highlighted the obliviousness of male privilege, but it didn’t get into the excuses frequently advanced by men who actively insist that they should be allowed to sprawl over public transit seating even in crowded conditions. “It’s more comfortable,” men claim, as though people of all genders wouldn’t also enjoy more room to breathe. Others employ the mysterious excuse of “biology” or say that they don’t like the idea of sitting with their legs crossed “like a woman,” as evidently this is the only alternative to sitting with one’s legs in a wide V.

Some men are ready to push back. At Jezebel, testicle expert Mark Shrayber says: “As the proud owner of a set myself, I can tell you that I’ve never had to take up anyone else’s space on the bus just to keep my testicles happy. Men’s rights activists can claim it’s biology all they want, but unless one is suffering from some kind of condition, most men can, in fact, keep their legs closed and even CROSS THEM.”

Brian Moylan at Time agrees: “I can say that there is no possible way that your package is that big that you need to sit with your legs spread like the Grand Canyon. … As an owner of a set, I know that testicles do not get that sweaty and even if they did, sitting as such would not create an adequate cross breeze to cool them down.”

The question is whether the MTA will do some ballbusting of its own and start ticketing men who take up excessive space on the subway.

Busted, manspreaders. The question is whether the MTA will do some ballbusting of its own and start ticketing men who take up excessive space on the subway, a move that comes with a $50 fine. If it does, it’ll be sending a sharp message to seat hogs, but it might not make much of a difference, something Jezebel’s Madeleine Davies noted in 2012 in an impassioned rant about manspreading. The practice isn’t about a conscious desire to take up space, but rather, an unconscious assumption that it’s OK to use as much room as desired. Even as women wedge themselves into tiny corners or perch on the edges of their seats to accommodate men, reminded that they’re not supposed to take up any space at all, manspreaders will continue gleefully letting it all hang out. Because that’s always been the way it’s done, and it always will be, unless we confront the real problem.

It’s the male privilege, stupid, and no courtesy campaign is going to eradicate it.