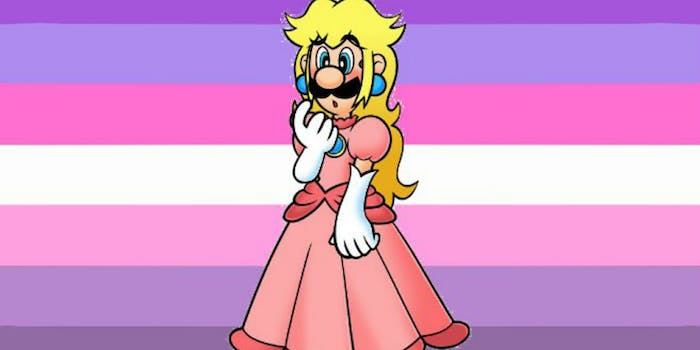 Fans think Luigi may be transgender

The character has a lengthy history with gender nonconformity, too.

The internet’s thirstiest meme Bowsette isn’t actually canon, as it turns out. But don’t worry, fans have a new theory. Some think Luigi is transgender.

When the feature was originally announced, it spawned dozens of theories suggesting anyone could be feminized by the crown, hence Bowser becoming “Bowsette.” Now, several months later, the New Super Mario Bros. U Deluxe website confirmed that only Toadette can use the crown, much to Luigi’s disappointment.

“When Toadette finds one of these, she can transform into the super-powered Peachette,” the website writes, before continuing, “(Sorry Luigi—only Toadette can use this item!)”

Nintendo’s joke about Luigi quickly grabbed fans’ attention. The aside seems to reference Toadette’s inclusion as an expansion character in New Super Luigi U for the Wii U, plus Luigi’s tendency to crossdress. But the Super Crown doesn’t just throw feminine clothes onto a character, it literally gives Toadette a feminine, Peach-like body. Plus, the comment sounds so pointed at Luigi that trans women began arguing Luigi wanted to put on the Super Crown to become a girl, not just dress as well.

Thus, through Bowsette’s canon death, a new theory was born: Luigi is trans. The idea quickly took off.

Trans Luigi is canon. She just wants to have the body of a girl, Nintendo. #TransLuigi pic.twitter.com/YLRdhrq3zt

Luigi is a girl and I am here for her.

hey so about Luigi being a trans girl…

There’s plenty of art (and memes) floating around dedicated to the theory too.

When Nintendo tries to cancel Bowsette but now people have decided that both Bowsette and Luigi are trans girls https://t.co/Uy2BKYmDOO pic.twitter.com/sjokJYTVRO

For the record, there is some credence to the “Luigi is trans” theory. For one, there’s the “Mama Luigi” episode from the Super Mario World series, where Yoshi calls Luigi “mama.” Luigi proceeds to adopt the name, sparking the oft-repeated “Mama Luigi” meme.

Then there’s Luigi’s history with crossdressing. In Mario & Luigi: Superstar Saga, Luigi crossdresses as Peach in order to trick Bowletta into releasing the real Princess Peach. Luigi similarly dressed up as Peach in Nintendo Power’s Super Mario Adventures comic, and he also considers wearing a dress in Luigi’s Mansion, saying dresses look “kind of comfortable.” At this point, Luigi’s gender nonconforming tendency to dress up in feminine attire is pretty expected.

Guess Luigi's into crossdressing! Well he HAS disguised himself as Peach a few times, so wearing dresses isn't new to him! #luigismansion #luigismansion3ds #crossdress #prettydress #dress #weegee #luigi #videogame #nintendo

Granted, people who choose to crossdress aren’t necessarily transgender, just gender nonconforming. But for some trans people, Luigi’s repeated fascination with dressing up as Peach or throwing on a dress represents a deeper desire, as if Luigi crossdresses as an outlet to express his gender identity.

In other words, trans people find it easy to argue that Luigi secretly (or not-so-secretly) wants to be a girl, and crossdressing is just one way to back up the theory. Twitter quickly embraced the idea.

(side note luigi is trans as well which is why yoshi refers to him as mama) pic.twitter.com/RUtbPjBeJ4

Others think the Super Crown line is just a reference to Luigi’s cross-dressing tendencies. After all, many crossdressers don’t identify as trans, hence fueling some skepticism against the theory.

Is Luigi confirmed to be transgender? Or is it just they’re into crossdressing ?

it's also referencing luigi's mansion where inspecting a row of dresses causes him briefly consider wearing them. Luigi's been depicted crossdressing in some of those mario comics. Nothing points to him being trans, just doesn't mind crossdressing.

For now, the internet can’t tell for certain whether Luigi is a girl, a crossdresser, or identifies in another way altogether. Nintendo for America declined to comment to the Daily Dot for this story.

But don’t let canon stop you. Clearly, Super Mario’s queer fans have an imagination powerful enough to create their own stories for Nintendo’s iconic characters. So go ahead, argue Luigi and Bowsette are trans. After all, sometimes fandom is the best way to express yourself.