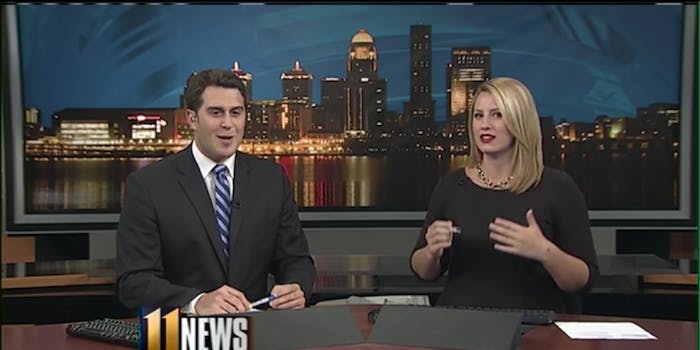 Can you catch all 46 classic rap references in this news segment?

That “Humpty Dance” reference? That Skee-Lo refrain? You might need to listen twice to get them all.

Adam Lefkoe is a sportscaster at Louisville, Kentucky’s WHAS 11 station, where he’s currently deep into football season. Recently, he decided to change up his Sunday night sportscasts a bit.

On Sept. 1, he used Twitter to crowdsource classic wrestlers’ names and added 31 to his regular newscast. A week later, he squeezed in 41 Seinfeld references, also crowdsourced from Twitter.

On Sept. 15, he debuted “RapCast,” which offers 46 mentions of classic rap lyrics, gleaned from Twitter, which he deftly inserted into a five-minute segment. That “Humpty Dance” reference? That Skee-Lo refrain? You might need to listen twice to get them all. Lefkoe’s just that good.

Lefkoe mentions at the end of RapCast that this might be the last segment for a while, and to, you know, chill ‘til the next episode. Apparently his “mic drop” got his mother’s attention.