The confusion started mere minutes after the announcement that the Velvet Underground cofounder had passed away at the age of 71.

After news broke that rock & roll legend Lou Reed passed away Sunday, many fans took to Twitter to mourn his demise. Some, however, confused Reed, who wrote “I’m Waiting For The Man,” “Sweet Jane,” “Pale Blue Eyes,” and countless other classics, with Lou Bega, the German one-hit wonder who penned “Mambo No. 5,” because apparently the world is ending in neither fire nor ice but with everyone choking on a giant, all-consuming haze of stupidity.

The confusion started mere minutes after the announcement that the Velvet Underground cofounder had passed away of liver failure at the age of 71. Many of the tweets were clear attempts to bait others into believing the news, and if Lou Bega’s own Facebook page is in any indication, it worked.

RIP Lou Bega. Your version of Mambo No 5 helped shape my adolescence.

(For the record, Tardar Sauce, a.k.a. Grumpy Cat, is still alive and scowling, although I will admit that one elicited a gasp from me as well.)

This Google Trends graph, which shows the volume of searches for “Lou Bega” over the past 30 days, gives you a better idea of just how well this plot worked: 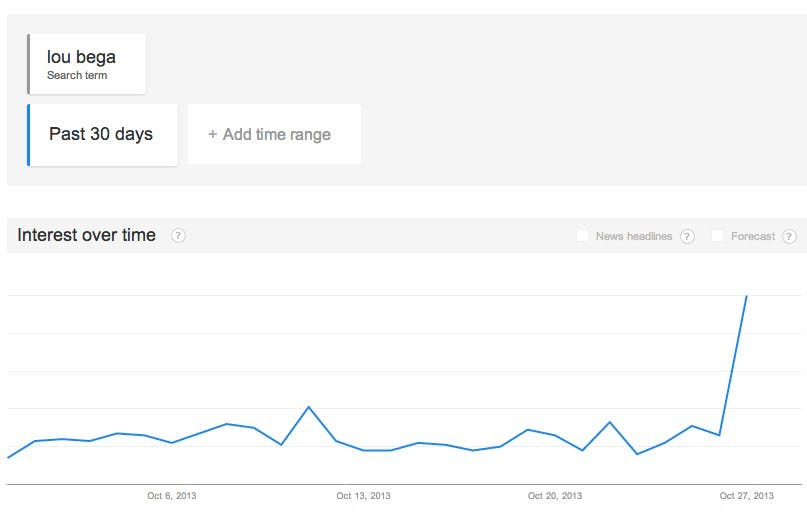 Yesterday, the man who ensured that parents giving their female children names ending in “-a” would be brutally mocked for the rest of their lives felt compelled to speak out on his Facebook page (which has 17,000 likes, by the way): 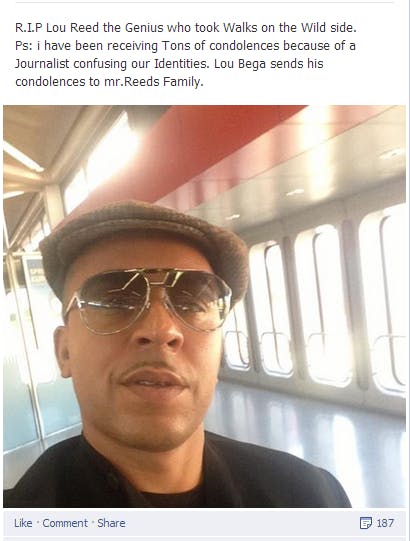 So everyone who relentlessly blasted “Mambo No. 5” from their HitClips players at their best friend’s birthday sleepover parties can all breathe a sigh of relief (followed by a collective, “Wait, Lou Bega is German?”).

Correction: An earlier version of this story failed to note that many of the quoted tweets were made in jest.