I hired an Internet stranger to take me for a walk

One step at a time.

A few months ago, I moved from New York—the pedestrian capital of the planet, “hey, I’m walkin’ here,” etc.—to Los Angeles, a city of clogged freeways. But contrary to my expectations, much of L.A. is rather walkable. The sidewalks are usually empty, and the weather’s almost always nice.

It was while walking around my adopted neighborhood of Los Feliz that I was struck by a curious flyer attached to a streetlight. It advertised the services of a “People Walker,” pointing me toward a Facebook page. 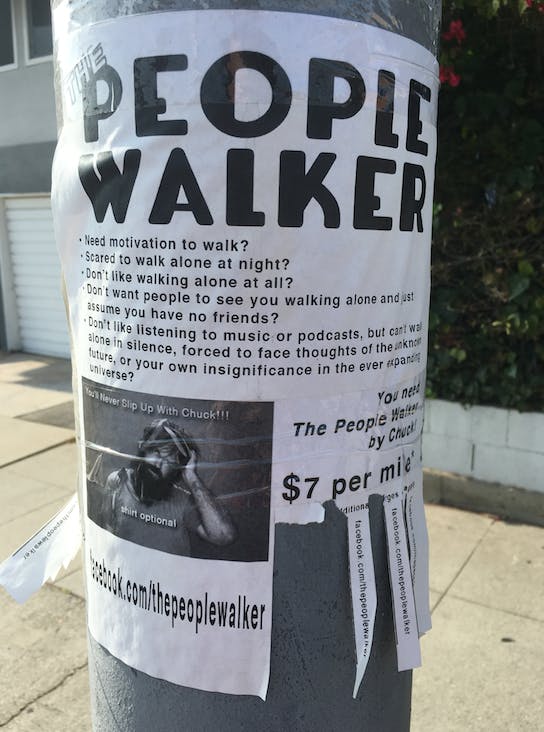 Walking in L.A. may have been more pleasant than I’d been led to believe, though strolling these sunny streets could also often be lonely. I wasted no time in contacting the People Walker and arranging an appointment for the following afternoon. (Full disclosure, he waived his usual $7 per mile fee in light of the fact that I’d be reviewing his service.) 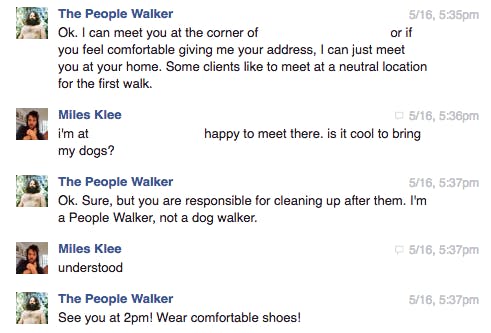 A few minutes before 2pm on the day, I got word that the People Walker had arrived. Though his ad notes that his shirt is “optional,” I’d neglected to specify either way, so he’d come along in a white tee that announced—in bold marker—that he was, in fact, the People Walker. This seemed like a smart way to avoid any possible confusion, as anyone who has tried to get into an Uber that turns out not to be one would doubtless agree.

“Hi, I’m Chuck, the People Walker,” said Chuck the People Walker, giving me a hearty handshake. We set off straight away as Chuck laid out the planned walk, uphill and west, toward a specific entrance to L.A.’s famous Griffith Park. “We can tool around up in there for a while and come back,” he said. “It’s about two miles.” He let me pick the route to the park.

And just like that, we were a couple of flâneurs, taking in the lovely afternoon—though still walking at a vigorous clip. I got the sense that Chuck was matching his stride to mine and would have effortlessly slowed it for a client with longer legs. We went over the possible reasons for hiring a People Walker, of which Chuck certainly has no shortage.

“A lot of the time, fitness and this stuff is a matter of making sure there’s someone you’re accountable to,” Chuck said. “That’s why people hire personal trainers.” Still, this was a venture designed to “make a little extra money.” The concept is of the sort Chuck once peddled for free on a now-dormant blog called Ideas By Chuck. Anyone who used these pitches and made a million dollars, he said, was theoretically supposed to pay him.

“I’m trying to make my ideas happen myself now,” he said.

Soon our conversation flowed freely, touching on topics that included the various places we’d lived, the course of our Internet travels, our jobs, California cults, medieval swordsmanship, the film industry, and the lay of the land itself. Chuck showed me to a series of shady, winding paths in Griffith Park I’d yet to discover, and pointed out an “overpriced coffee shop” called Trails. “It’s worth going, taking your wife to, whatever, because when people find out you’ve moved here, they’ll be like, ‘Have you been to Trails yet?'” he remarked. This was another advantage for his clients: finding out “which bars suck, which restaurants are surprisingly good.”

Even so, there are some wrinkles to be ironed out. Up till now, Chuck has mainly just walked his friends, but word of the People Walker is getting around town. “I couldn’t meet a client because she was in Santa Monica,” he lamented. “Once I drive an hour to take someone on a walk, I’ve really eaten into my profit.” Later, we wondered if he might someday have to contend with a rival People Walker and get into a turf war.

By the time we’d explored the park and returned to my street, neither of us seemed willing to let the walk end. I commented on the spiritual aspect of walking with someone. “It’s good for the brain; it gets the blood flowing,” Chuck agreed. “Plato used to walk with his students—not that I’m Plato.” But with his serene air and impressive beard, he does resemble a guru.

Before he dropped me off, we passed the People Walker flyer that had first drawn my attention, so I asked Chuck to pose for a photo. Then, in front of my house, we took a selfie to commemorate a truly excellent walk. And though the experience had been gratis, I felt compelled to give him a tip. 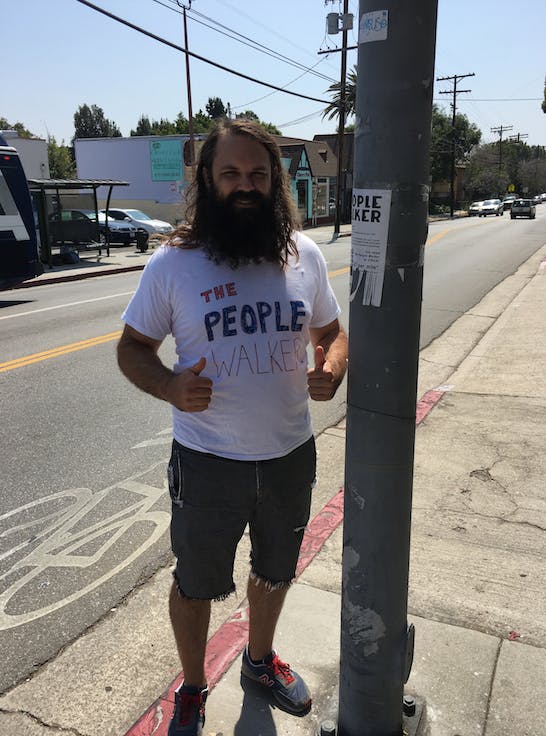 “You’ll probably see me everywhere now,” Chuck said, and I was sure I would. We’re neighbors, after all, and turned out to have some local friends in common. Even if he were walking another client, I told myself, I might see about tagging along. And while I’d definitely try to wear different shoes next time, I got a strange satisfaction from the sudden callus on my toe.

But the very best part? Because I’d worked up such a good sweat walking and talking with Chuck, I decided it was fine to skip my daily run. 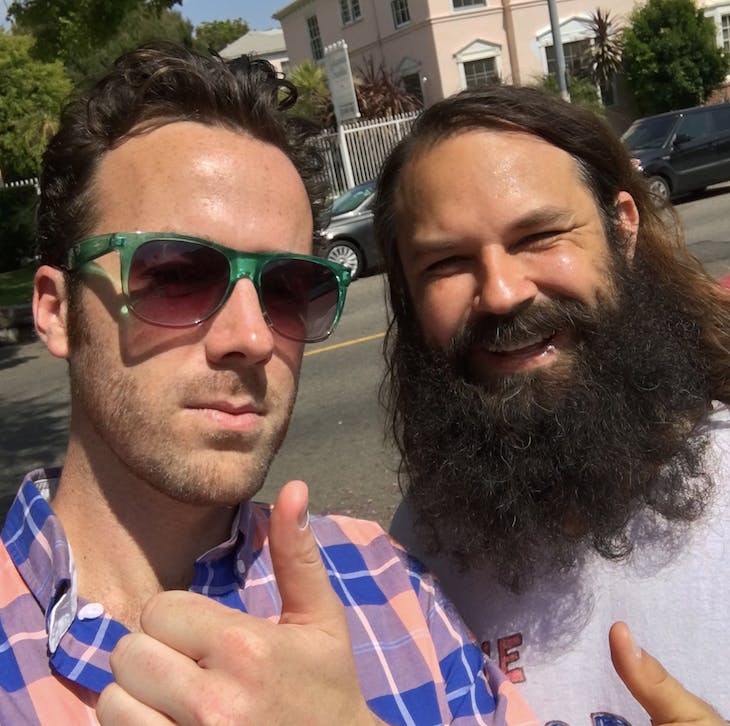