The best/worst Missed Connection to come out of Lollapalooza

Lollapalooza was full of missed connections. Literally, there was no cellphone service or Internet and no one could reach anyone else. (Here’s one concertgoer’s diary.) That won’t stop some dude in a neon YOLO wife-beater and pink shades from trying to hook up with the recreational-drug-loving, half-bird-half-human indie-rock dreamgirl he spotted at the Lana Del Rey show.

He didn’t get her number because they were “both so into the show,” but they “really had a connection,” he thinks. To Craigslist! 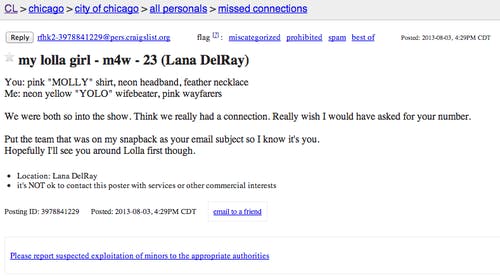