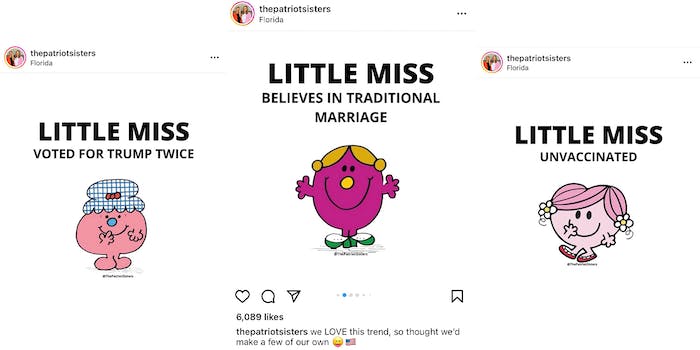 The quick death of the ‘Little Miss’ meme

Between brands and conservatives taking it over, it's already peaked.

The life of a meme can often transcend platforms; as it wanes on one, it can gain a new audience on another. For the Little Miss meme, which riffs on designs from decades-old children’s books, that’s very much the case, but it also met the same fate as so many memes before it.

First created by author Roger Hargreaves, Mr. Men and the spinoff series Little Miss were a series of books starring characters named after their most prominent character trait. The books were also accompanied by images of characters (usually circular in design) that embodied and expressed those traits. (Mr. Grumpy, Mr. Marvelous, Little Miss Helpful, and Little Miss Bossy are just a few of the dozens of characters from the series.)

Hargreaves’ series is for kids, but the format of the books he and his son Adam Hargreaves created is perfectly geared for the internet, even if their inception predated memes by several decades. With an image on the bottom and the descriptor at the top, the book covers are formatted like a meme and make for easy digesting and sharing. It doesn’t take much to customize the text to make it more hyperspecific and relatable, or much effort to post them with a quick “same.”

According to Know Your Meme, the first instance of the Little Miss meme popped up on Tumblr in 2021, and by April 2022, it made its way to Twitter.

It was around that time the Instagram meme account juulpuppy, credited with popularizing the meme format, started to share a variety of Little Miss memes, which often referenced personality disorders. Speaking to Hypebae, juulpuppy said that they made the Little Miss memes in “hopes that they would build community and help young women feel seen and represented, while also being able to laugh at themselves.” (We reached out to juulpuppy with an interview request.)

Two months later, Little Miss jumped over to TikTok, where videos using the hashtag #littlemiss have been viewed more than 91.7 million times. While some of the videos were imagining new versions of the Little Miss meme with their lives, their friends, or something like Zodiac signs, others commented on how widespread it was.

Even as Little Miss’ popularity grew on TikTok, that didn’t stop other platforms from sharing the memes; after a certain point, people on Twitter didn’t even bother to use photos anymore. Some of them were incredibly meta.

While others used the memes to convey political ideas, including conservatives who used them to spout their support for traditional marriage and being unvaccinated against COVID-19, which led to spoof memes that stated conservative values.

Like all good memes, it’s fun and games until brands try to coopt the meme, which they have done in droves.

The meme cycle is well-known enough that people started commenting on it well before it played itself out.

The Little Miss meme died as it lived: Sharing a strong but singular personality.