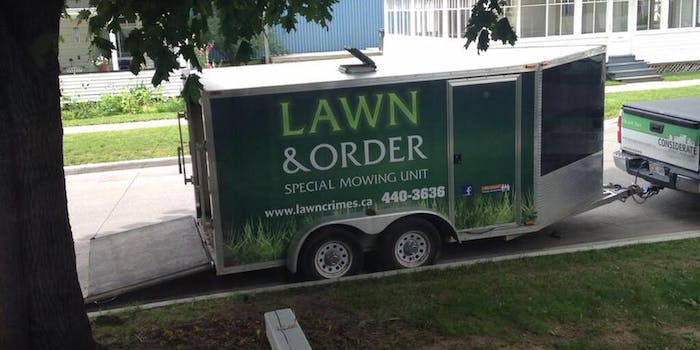 Lawn & Order whacks away the most heinous weeds

In the yard maintenance system, people are visited by two separate yet equally important groups: the weeds, who plague the lawns; and the mowers, who whack the weeds. These are their stories.

Lawn & Order is ready to thwart the tangle of vines, masses of weeds, and other lawn crimes that have soiled your front yard. Brothers Adrian and Carson Butts own the lawn care service, which covers the Fredericton area in New Brunswick, Canada. Based off one of television’s most popular shows, their company’s clever name has gained considerable attention from both possible clients in their area and the Law & Order-obsessed Internet.

On Tumblr, a photo of one of their trailers has amassed over 125,000 notes.

Adrian and Carson already owned another company that manages properties called Considerate Property Management and actually bought Lawn & Order after seeing a for-sale post on Kijiji, Canada’s Craigslist-like classifieds website. They saw a promising company name they could easily market and a customer list they knew they could grow, so they jumped at the chance to add it as a subsidiary company.

“We saw Lawn & Order and thought it was genius, so different than your regular company name,” Carson told The Daily Dot. “ I’m familiar with [Law & Order] from seeing it lots of times, but it’s really the marketing value that drew us in more more than a specific connection to the TV show.”

And the Butts brothers have definitely tapped into the series’ ethos as a way to attract people to the business. The branding and font they use on their website and trailers look similar to the show’s, with a little green and grassy spin. They refer to the lawn mowing group as the Special Mowing Unit. Their radio ad has the Law & Order theme song in the background and even states, “overgrown lawns are considered particularly heinous.” Adrian and Carson get great feedback and calls just for the branding itself.

“There was a time our crew was stuck downtown, mowing a building right downtown on the shopping street. Our crew got stuck there by a group of people who all wanted their picture taken with them,” Carson recalls. “They lost some valuable mowing time hanging out with this crew of people laughing and loving the name.”

Adrian and Carson’s Lawn & Order isn’t the sole company in the industry with the witty name. There’s another Lawn & Order that serves the Sacramento, California, area, along with services in New Jersey’s Ocean County, Norfolk, Virginia, and Miami, Florida. But the company spearheaded by the brothers is the one that’s been catapulted to fame on Tumblr and in its locale for its dedication to the legal drama.

Just as Olivia Benson has seen some ridiculous crimes in her tenure, Lawn & Order has also seen some pretty egregious lawn infractions. Once, the Special Mowing Unit were called out to a home just outside of town and told that yard hadn’t really been cared for throughout the season. When they got out there, the realized it was a drastic situation. It was a mobile home, low to the ground, with some weeds almost up to the roof. The gate was completely covered by foliage, and there were even weeds coming up through the sidewalk. A particularly heinous offense indeed.

And while Carson isn’t necessarily a Law & Order junkie, he does admit that his favorite spin-off is Law & Order: Criminal Intent—he’s a big Vincent D’Onofrio fan.