The viral legacy of Lauren Hill.

Lauren Hill was probably never going to be a superstar. Not playing Division III college basketball at tiny Mount St. Joseph University in Cincinnati and not if she were just any normal 19-year-old.

But Hill’s role in this life was more inspirational, more essential, more important than that. She wasn’t going to be a superstar, but in the words of Brad Johansen—a news anchor and reporter for the CBS affiliate in Cincinnati and the man who helped introduce Hill to the world—she became a superhero.

Hill, you see, was diagnosed with pediatric brain cancer as a senior in high school, 49 days after her 18th birthday, and yet, she still managed in November to play the season-opener for Mount St. Joseph, scoring the first and last layups in the game. The nation began to follow her story, as Hill teamed with The Cure Starts Now organization to raise money to find a cure for Diffuse Intrinsic Pontine Glioma.

Hill died last week at the age of 19, but the impact she made will continue to exist, because her story wasn’t simply confined to her family and friends and it wasn’t only confined to the Cincinnati area. No, Hill became a national inspiration.

As Hill, who suffered from an incurable cancer that normally affects children between 5 and 9 years old, said, “I was desperate and I didn’t want to be another local story that disappeared and become just another statistic on paper. I prayed that God would keep me here, and if He kept me, I would do anything I could to be the voice for little kids.”

Hill shined in her new role, putting in the work and appearances that would entice people who were touched by her story—and her exceptional perseverance—to donate to the cause.

But it started simply, with a TV interview with Johansen on Local 12.

Johansen had heard that Hill and her family had been trying to get her story out on the airwaves, and though she had received a little attention locally, Hill’s tale, for whatever reason, hadn’t clicked with the public. After Johansen learned that Hill badly wanted to play a college game before she died, he began covering what he calls the most emotionally draining assignment of his career.

He returned to the TV station after his initial interviews, and he told the management that he needed plenty of time on air to tell the story. TV news features usually receive two or three minutes. Hill and Johansen got six.

Then, the story and video were posted online. Then, it went to Facebook. “And,” Johansen said, “the rest is history.”

The story went viral in 24 hours, and the next day, the Hill family woke up and 900,000 people had clicked on her story. Soon, the national media began paying attention. Just in time for Hill’s collegiate debut.

Notice how the piece above said Hill had weeks to live at best. That was in November.

Johansen interviewed her before last Thanksgiving and prepared as it would be their last meeting. Then, people wondered whether Hill would make it until Christmas. Hill lived another four months after that.

“Every time you thought she was done, she would rise up and say, ‘I’ve got more work to do,'” Johansen said. “I said to her in the last TV interview from the hospital, ‘People ask me why don’t you just let go. It’s obvious you’re in pain and suffering. Your message has already gotten across. Do you think about that?’ She said, ‘Yes, there are times I would like to let go. I look at my mom and I look at my family and that God said when it’s your time to go, you’ll go. As long as I’m allowed to stay here, I’ll continue to fight.'”

Hill’s original goal had been to raise $1 million for cancer research before she died. As it stands now, Hill has topped $1.5 million.

Hill wouldn’t only be a local celebrity with a cause, after all. She wouldn’t be that name who became a statistic, that name that would simply disappear,

Johansen is, of course, a journalist, and since I know him rather well, I can tell you he’s fantastic at his job. But this was a strange assignment for him.

“We’re always told not to get personally involved,” he said. “That one was over for me on day one. I said to them in the living room, ‘We’re family now.’  I felt a tremendous obligation. I said that if I do this story the right way, everyone’s going to want to know. I felt an obligation, and when the story was done, I felt an obligation to carry it on as long as she was with us. I made a promise that I would carry this through.”

Meanwhile, as the national attention began to wane and as Hill kept on living, Johansen and his colleagues had to prepare for the end. They produced the piece that would serve as her TV obituary—it’s wonderful, by the way—and as Hill kept surpassing expectations, the team continued to refine and re-edit the piece. “In typical Lauren fashion,” Johansen said, “she gave us a little more time to prepare.”

Still, her death last week rocked the national landscape, and even LeBron James, perhaps the most famous basketball player in the world, tweeted about how he was deeply saddened by the loss of Hill. 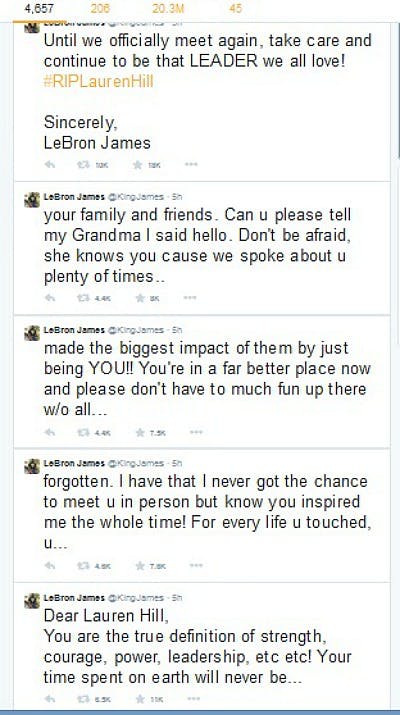 People sometimes call James a superhero. But that role was meant for Hill and Hill alone.

“There was just something very special about her,” Johansen said. “A different spirit, a different soul, something beyond a normal human. I know this girl had supernatural in her.”