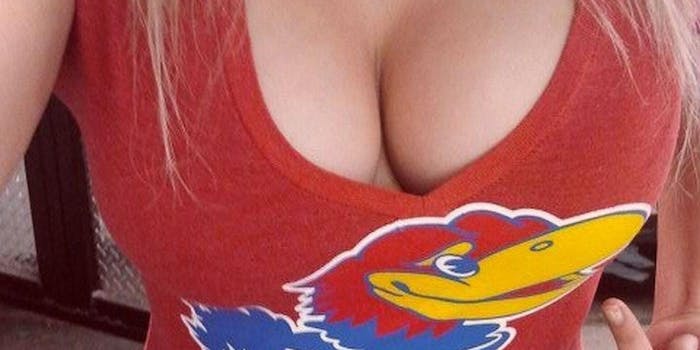 University of Kansas loses fight against boobs on Twitter

This is a tale of a school trying to shut down boobs on Twitter—and boobs, as usual, prevailing.

This is a tale of a school trying to shut down boobs—and boobs, as usual, prevailing.

The popular University of Kansas tit Twitter, KUBoobs, where young ladies can submit photos of their cleavage and nips decked out in KU gear, tweeted that it had been sent a cease-and-desist letter from the school yesterday.

KU Boobs has been ordered to cease and desist by The University of Kansas by June 12, 2013.

Since then, the story’s been picked up by Rock Chalk blogs and a local Fox News affiliate. It started a #saveKUboobs hashtag, with more women than ever sending in their support and supported breasts for the “boobment.”

The school may be backtracking because of student outcry against shutting down the site, which does sell merchandise with KU’s name on it (one example: bracelets that read “I Love KU Boobs”). According to Rock Chalk Blog, which obtained a copy of the cease-and-desist, the university did ask KUBoobs to stop using “KU” in its name. The Twitter and its sister Facebook page could continue if they rebrand themselves as unaffiliated with the University of Kansas. (Bummer, dudes.)

But the school changed its tune and clarified only after the #saveKUboobs submissions began flooding in. As of five hours ago, KUBoobs tweeted that it will live to boob another day.

As long as KU’s administration is cool with student nudity, look out for my new site, KUBalls.com, coming soon.