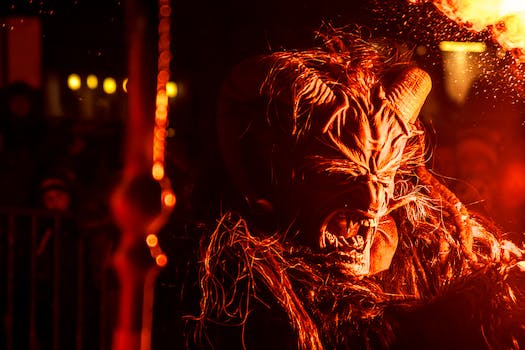 How an ancient European sex demon stole Christmas—and our hearts

Krampus has invaded the U.S., and the Christmas devil is here to stay.

If the thought of a jolly bearded man stuffing himself down your chimney doesn’t do it for you, how’s this: A horned and masked demon who prowls the streets, sweeping up bad children into sacks and carrying them away.

If that doesn’t get you into the holiday spirit, I don’t know what will—and that’s exactly how people feel across Austria, Germany, and some other parts of Europe, with annual krampusnacht festivals taking over the street on Dec. 5 (many European countries hold Christmas celebrations on Dec. 5 and 6 in honor of St. Nicholas’ Day). Dozens and sometimes hundreds of people dress up in ridiculous suits, masks, and horns before storming the streets to make a lot of noise in a boisterous parade.

You won’t spot krampusnacht stateside except in a handful of communities, but the Internet has embraced the phenomenon, so that might change in future years. Krampus is sort of like Santa’s bad sibling (technically, he’s Santa’s evil assistant, akin to Zwarte Piet in Dutch tradition). We all like to imagine the sinister side of fluffy and familiar pop culture characters—the Internet is also besotted with the Icelandic Grýla, a witch who stews bad children for Christmas, this year. In all cases, these figures have come to be associated with Christmas after the fact; non-Christian traditions tacked on to the holiday, or new traditions invented whole hog in the case of Zwarte Piet.

Santa’s evil sidekick is now firmly seated in U.S. pop culture: In 2004, he showed up in The Venture Brothers, and he dropped by the Colbert set in 2009. Grimm and American Dad had independent Krampus storylines in 2013. It would appear that, driven by the Internet, the American pop culture adoption of Krampus is proceeding apace—and he may be developing so much momentum that he can’t be put back in the box, which is bad news for naughty children hoping to get nothing worse than a lump of coal in their stockings. Krampus has a variety of punishments in store for his victims, including beatings, whippings, and more—which is why European children have good reason to be a little nervous when the streets are flooded with drunken adults lurching around in Krampus costumes.

As early as 2010, Chris Ward writes, “Once the Internet discovered Krampus, it was like the Flying Spaghetti Monster and LOLCats rolled up into one: A brand new ironic mascot for disillusioned, holiday-wary twenty and thirty-somethings. Krampus Beer is on the market, tons of worship websites [have sprung up and] tons of t-shirts, a brand new book of Krampus postcards and a shit-ton of homemade Krampus wares at Etsy.com have ensured that Krampus will live forever.”

The commercial phenomenon that Krampus has become is somewhat ironic, since it’s arguably a response to the commercialism of Christmas. “Some Krampus fans,” write Tanya Basu and Becky Little for National Geographic, “say it’s the commercialization of Christmas and the lure of a less cheery holiday character—Krampus has horns, dark hair, and fangs—that drove them to celebrate the beast.” Those self-same hipsters who profess boredom with the outsized role of Christmas in American culture may have shot themselves in the foot on this one.

With Christmas becoming ever more saccharine and increasingly dedicated to spending, rather than spending time with family and friends, an anti-commercial backlash is hardly news. Embracing Krampus is certainly one way to push back, with the demon acting as the dark opposite of Santa, using that reindeer whip for something other than speeding the sleigh along. But there’s something more to the rise of Krampus culture as it’s returned in full force to Europe (the Catholic Church successfully banned it for centuries and during the Second World War, the Nazis suppressed krampusnacht celebrations) and spread to the United States.

Have trouble imagining Christmas as a season of hedonistic celebrations rather than demure gift-giving? Then its history might surprise you.

“The annual debauchery got so bad—think public orgies—that from 1659 to 1681, Massachusetts’ Puritans banned Christmas altogether,” says Quartz’s Caitlin Hu. Put that in your wine and mull it. Perhaps as Christmas has become an orgiastic show of commercialism, some of us are interested in returning to its more earthy roots; historically, December didn’t provide a whole lot for anyone to do. The cold weather and short days made planting impossible, while crops had been brought in for the winter. People could only do so much weaving, mending, and maintenance, and that left a lot of time for telling tales and fooling around (in more ways than one) around the fire.

It’s no coincidence that rowdy celebrations started to develop in December, with the solstice being important to many Western cultures and people choosing to celebrate with lots of beer, fires, and fun times. Even after pagan influences faded in Europe with the adoption of Christianity, many aspects of pagan traditions were integrated into the church, in part to woo those who might have preferred to sit on the fence and see how things shook out with Jesus. The fact that the church felt moved to actively suppress Krampus parades is an indicator that this particular tradition of letting our hair down over the darkest weeks of the year lingered; and our return to those traditions may be an indicator of our cyclical nature.

The holidays grow more stressful every year; the pressure to pick out presents, travel for celebrations, and navigate the holidays seems like more of a burden than a pleasure for many celebrants. Notably, booze has been flowing plentifully at Christmas parties for a very long time, and Krampus seems like a natural extension of that tradition, providing an excuse to dress up in ridiculous costumes, get silly, and take to the night for some fun, with less of a risk of puking on the boss’ shoes or getting involved in a regrettable karaoke performance.

America may have appropriated Krampus from European traditions, but it’s embracing the spirit of the holiday wholeheartedly. Tragically, given the nature of commodification in the United States, it seems inevitable that Krampus will eventually be neutered and turned into a product rather than a cultural phenomenon, sold in stores to eager children and passed down in popular mythology as a softened, family-friendly version of his real self. It certainly wouldn’t be the first time America has diluted a cultural tradition—we have American illustrator Thomas Nast to thank for the plump, jolly, friendly version of Santa Claus, and we’ll probably be enjoying a tame Krampus from Hallmark on store shelves soon enough.