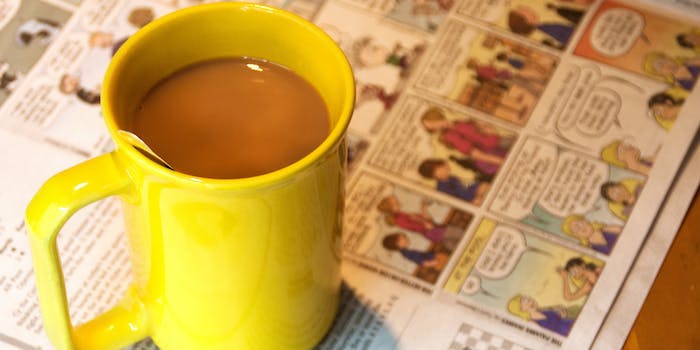 If you’re a newspaper editor and you suddenly decide to pull a bunch of your daily comic strips, expect to incur the wrath of your readers—of all ages.

After the Herald-Times in Bloomington, Ind. pulled a number of color comics from its Sunday edition, including Garfield, Ziggy, and Frank & Ernest, the newspaper received an angry, profanity-laden voicemail from, of all people, an 8-year-old boy.

“I’ll give you all of my money if you just give us it back,” the boy snarls into the phone. “Idiots. Jerks. Shitholes.”

Herald-Times editor Bob Zaltsberg took the time to personally return the boy’s call and apologize for the strips’ cancellation.

“He was still pretty mad when I talked with him this morning, but he was relieved to hear he’d still be able to read Frank & Ernest six times a week,” Zaltsberg wrote.

Zaltsberg also wrote that the boy’s mother had encouraged her son to call the paper to vent his frustration and, after hearing what he had to say, remarked “he hadn’t been as nice as he should have been on his voice message.”

A message to all 8-year-old Daily Dot readers out there: rest assured that all of the great comics on our website aren’t going anywhere.