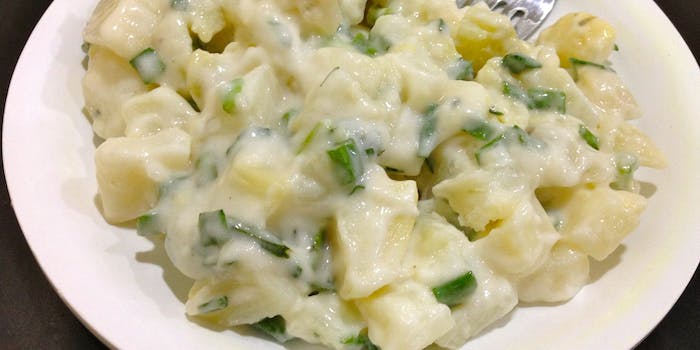 “Cookie Salad” is not funny. But the predictability of the trend is unintentionally hilarious.

So everyone has heard about the potato salad project.

Obviously it’s funny (and anyone who calls it “wasteful” or “insulting” is not thinking clearly about money nor jokes). The attention is surprising (there are plenty of earlier silly Kickstarters) and also funny.

But what really cracks me up is that Kickstarter has been inundated with copycat projects. Of the 643 food projects launched after Potato Salad, at least 319 (I counted conservatively) are potato-salad-inspired joke projects. None of them has been anywhere near as successful, but generally that’s not the point. The point is to make a joke (which, under the new simplified Kickstarter rules, is not explicitly disallowed).

The actual projects are unfunny, of course. They all feel like a dad turning to his kids after a movie and misquoting it in a goofy voice. Or David Brent or Michael Scott doing a standup routine—read enough of them and the bad humor is the joke.

Cookie Salad > Potato Salad (above) has a $30 stretch goal: “I will film my cat Truman wearing a bib, eating the salad.”

Cheese on Toast will include “the highest quality cheese from a cow. That’s right. A cow.”

The helpfully labeled Egg Salad [parody] says, “An amazing egg salad must start with perfectly hard-boiled eggs. This is my weakness.”

Extreme Egg Meals “are born out of big, unusual and weird pans. Why? Because it’s the EXTREME way to do it.”

An Above Average Grilled Cheese is “Better than Robin Thicke’s new album.”

That One Time I Made a Pizza begins, “Long ago, in the halcyon days of yore, I made a fine pie.”

Nutella Covered Bacon is as you imagine.

Like the Office bosses, these creators imitated comedy while completely whiffing on what made the original project funny: its originality, its understatedness about its mundane goal, its deadpan presentation as a valid Kickstarter project (which it technically is). Like the contributors to the original project, the knockoff creators wanted to be part of the joke. Unlike the contributors, they didn’t understand the joke. The audience hasn’t voted with dollars, or even comments.

The pile-on always happens with viral jokes. Everyone wants to join in. Look at the Amazon reviews for a gallon of milk, pages full of people trying to outdo each other with overwrought odes and poetry. Or the success of advice memes and “Shit People Say,” where everyone can iterate on the same premises. Much of the time, a pile-on can produce hundreds of jokes at least as funny as the original. But the Kickstarter copycats come across more like the old Million Dollar Homepage knockoffs, or the novelty Twitter, Tumblr, and Facebook accounts for hurricanes, Pharrell’s hat, or “binders full of women.” Each iteration is unfunny, but the predictability of the trend is unintentionally hilarious.

And that’s the extent of their effect. They’re certainly not a sign of some flaw in Kickstarter—the projects failed to gain attention or money, and no one’s been hurt. They’ll stop appearing as the public moves on. They will remain as a pleasant reminder that sometimes, even in the world of live Twitter commentary and memetic mutation, the crowd can’t improve upon a joke.