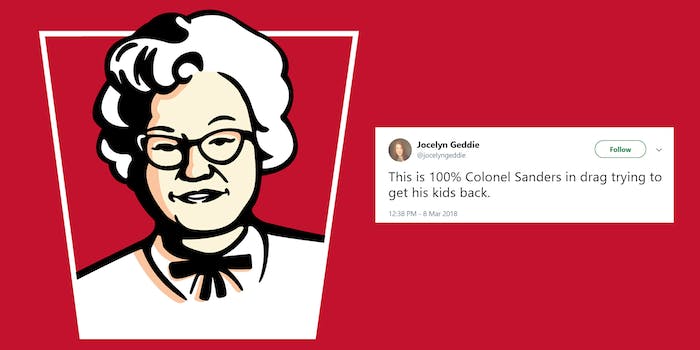 Today is International Women’s Day, and the brands have been preparing to let you know how much they care about women. McDonald’s flipped its golden arches on the company’s social accounts to make the M a W. (The W is for women, get it??) KFC Malaysia has followed suit with Claudia Sanders, Colonel Sander’s wife.

Marketing Week tweeted out the story and photo:

Here’s KFC Malaysia’s official tweet about Claudia, who KFC said should be recognized because she “mixed and shipped the spices” for Sanders’ chicken. Yes, really.

This International Women's Day, we want to celebrate another Sanders.

Learn more about her story at https://t.co/FVSHdlkfHV, and share your own about the woman who has made a difference in your life with us on Instagram by tagging #KFCIWD! pic.twitter.com/Kch6kG6zDL

But just a couple of months ago, Reba McEntire played Colonel Sanders in an ad. So does that mean McEntire is now married to Claudia in this fictional fast-food universe? We hope so.

"how can we reach out to women and make them feel empowered?"

"i've got it. colonel sanders but a woman."

I can’t imagine this stage of capitalism is any worse than the next one where it all collapses and we all die https://t.co/l28ZrNsTIk

This is 100% Colonel Sanders in drag trying to get his kids back. https://t.co/9DoliKeVqD

On KFC’s website, the company stated why it was bringing out Claudia for IWD:

It is hard to imagine but KFC would not be where it is today if not for Claudia, wife of Colonel Sanders. While the Colonel created the secret recipe and ran the company, Mrs Sanders mixed and even shipped the spices to restaurants across the country – often late into the night.

This International Women’s Day, we pay tribute to Claudia Sanders for her role in the making of Malaysia’s favourite fried chicken. And to every woman whose ideas, hard work and passion contribute to making the world a better place. Thank you.

KFC invited customers to “Tag #KFCIWD and tell us about the Claudia in your life.”

Some people jokingly asked other brands to reveal their own lady mascots (or spouses of mascots).

I won't rest until @Wendys gives us Mendy's. https://t.co/tW8qLxV8HG

May the best brand win… our respect for not trying to pander to us.