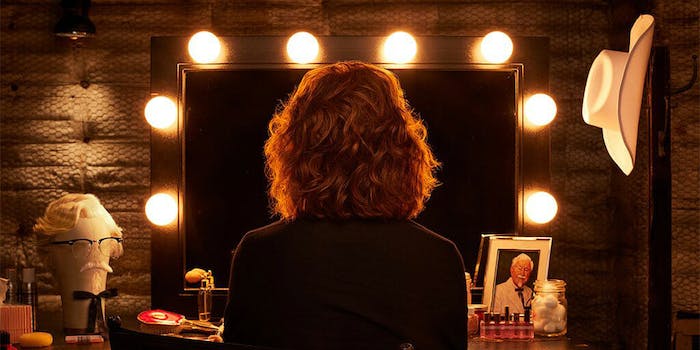 The country icon is the first woman to don the suit.

“I swear I’m not a famous woman,” croons Colonel Sanders in the latest KFC commercial, which debuted Thursday evening.

However, a famous woman is exactly what the new colonel can be defined as—she’s country queen Reba McEntire and the first woman to play the colonel for KFC.

As part of KFC’s new ad campaign, McEntire shows off her comedic charm and talent as she sings a honky-tonk tune about the restaurant’s new menu item, Smoky Mountain BBQ fried chicken, inside a Roadhouse. She even throws her hat to her “regular” self, who is also sitting in the audience watching the performance.

McEntire joins a long list of (male) celebrities who have donned the white suit, white wig, and mustache, including Rob Lowe, Norm MacDonald, Jim Gaffigan, and George Hamilton. But in a year where female empowerment has been at the center of pop culture, it’s fitting that KFC would make a progressive change to the face of its menu.

Except that wasn’t the company’s motivation. KFC told Today that they were not inspired at all by the #MeToo movement or recent discussions about the lack of female representation in media.

“KFC has always said that the role of the colonel is bigger than any one person, and that anyone who embodies the colonel’s spirit of entrepreneurism showmanship is qualified to play the iconic role,” a spokesperson told Today.

Whether it was their intention or not, folks on Twitter definitely think the commercial is trying to make a statement about feminism.

It's still not going to get women to eat KFC. PS @ChurchsChicken is better.

Reba McEntire is the new Colonel Sanders for KFC.
This is how 2018 is truly supposed to be.
Dreams do come true.
Women really can do anything.

And then, of course, there’s this guy who thinks KFC’s food is directly tied to the gender of a fictional character.

The iconic country star is the perfect spokesperson for a new bbq fried chicken because she’s, like, a country star? Or as one Twitter user aptly put it, her Southern twang alone can cause cholesterol to rise.