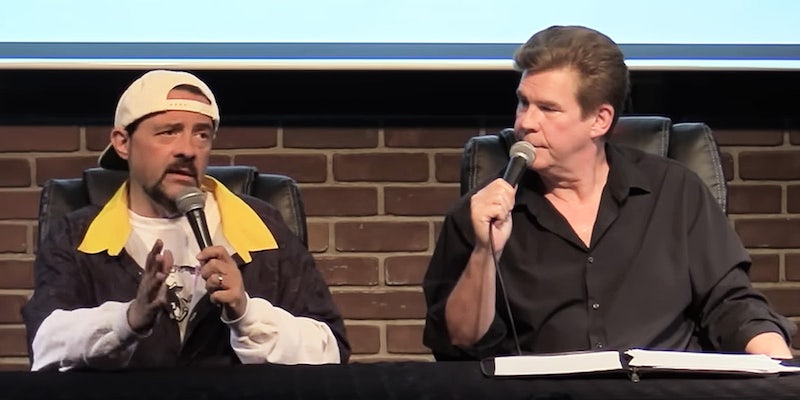 Kevin Smith calls out Warner Bros. Discovery for canceling ‘Batgirl’ but not ‘The Flash’

'Flash is the Reverse-Flash in real life'

After Warner Bros. Discovery’s earnings call in which the company defended its decision last week, the fallout from canceling the Batgirl movie continues, and the latest critique over the move arrives from someone who’s done more than a few superhero-centric projects.

On his show Hollywood Babble-On, Kevin Smith, who previously directed episodes of Supergirl and The Flash on the CW, chatted with Ralph Garman about Warner Bros. Discover’s many controversial decisions over the past few days. As he dove into the news about Batgirl, Smith emphasized that he didn’t have insider knowledge of what went on behind the scenes, but he said that it “added a new fear to the mix” for directors making projects.

Like many, Smith drew comparisons between the “baffling” decision to cancel Batgirl and leaving The Flash on the release schedule given the stories emerging around star Ezra Miller.

“That is the baffling thing,” Smith said. “I don’t give a shit how bad the Batgirl movie is, nobody in that movie is complicated or has anything in their real life you have to market around. In The Flash movie, we all know there’s a big problem. Flash is the Reverse-Flash in real life.”

Smith and Garman moved on to other topics, but they eventually circled back to Batgirl. Smith can understand why Warner Bros. Discovery canceled it from a financial perspective and explains to his audience how it’s shelving the film to get a tax write-down, along with the justifications made around the decision. But for Smith, the optics of canceling a film starring an Afro-Latina actor as Batgirl don’t look great.

“It’s an incredibly bad look to cancel the Latina Batgirl movie,” Smith said. “You know what I’m saying? I don’t give a shit if the movie was absolute fucking dog shit—I guarantee you that it wasn’t. The two directors [Bilall Fallah and Adil El Arbi] who directed that movie did a couple of episodes of Ms. Marvel, and it was a wonderful fucking show and they had more money to do Batgirl than they had to do an episode of Ms. Marvel and stuff.”

Although some fans quickly accused Smith of being “woke,” he’s voicing a sentiment that’s been echoed elsewhere online over the past few days.

He also pushed back at the idea that Batgirl looked too cheap to get released, pointing to its large budget and his experience directing on the CW to highlight how the film couldn’t have looked that bad.

“I love all the CW shows, but the CW shows show their budgetary constraints,” Smith said. “They said Batgirl looked too cheap because it was a $90 million movie. How do you make a cheap-looking $90 million movie? If it looked slightly better than an episode of Arrow, then why couldn’t we see that?”

Smith also revealed in Hollywood Babble-On that he had been tapped to co-write and direct an episode of DC’s Strange Adventures on HBO Max, but the show is now dead, a decision that Smith attributed to the “new regime.”

He and his collaborators still got paid for their work, but he was still bummed by how it all turned out.

He also detailed that his episode would’ve been centered around the Daily Planet’s Jimmy Olsen and Bizarro, and there had been talks of potentially getting Nicolas Cage, once tapped to play Superman in a film that never panned out, to play the DC villain.