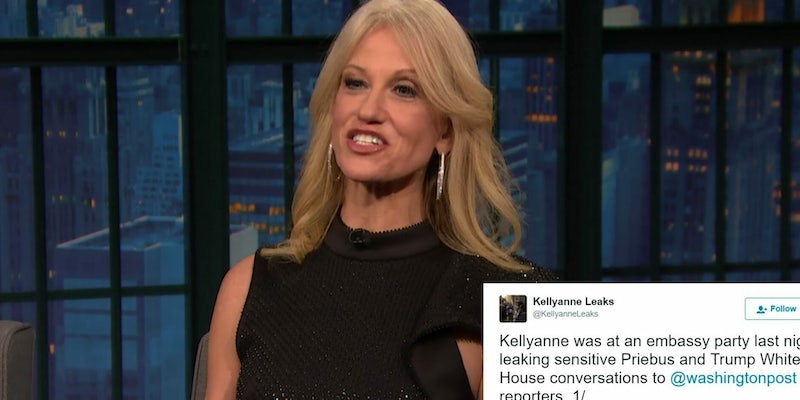 She didn't know others were listening.

If there’s anything President Donald Trump has been consistent about, it’s his dislike of leakers in his administration. Which means, according to recent reports, White House counselor Kellyanne Conway could feel the president’s wrath sometime in the near future. That’s because Conway reportedly shared behind-the-scenes details of the administration’s response to questions about the alleged James Comey tapes, albeit in an off-the-record conversation, with reporters from the Washington Post.

It was an alleged witness to the exchange who put Conway on blast, creating a Twitter account called @KellyanneLeaks to detail what they overheard. This is crucial, because given that the chat was reportedly off-the-record, it would be a breach of journalistic ethics for one of the reporters Conway was speaking with to have revealed what she said. According to Politico, two other sources confirmed Conway’s remarks.

As laid out on the Twitter account, Conway supposedly discussed the talking point the White House gave her to use if she was asked about the Comey tapes. Trump implied in a menacing tweet following Comey’s firing that there might be recordings of their conversations, something Comey testified under oath that he hoped was true.

“Jim Comey will have to wait and see about the tapes,” Conway reportedly said of the talking point. “I chose to convert that to ‘no comment.’”

She held court for an hour or so as folks cycled in/out of her circle. She said Trump gave her a line to talk about "the tapes" to press 2/

She said Trump told her to say "Jim Comey will have to wait and see about the tapes"; she added "I chose to convert that to 'no comment'" 3/

…and laughed. Here's where she put those "no comments" and "I can't comment on that" in action: https://t.co/HBzRiIkvtV

The account also claims Conway talked a little trash about Reince Priebus, mocking the White House chief of staff in a faux-dopey voice and joking that he was simply upset that someone wasn’t pronouncing his name correctly.

She had a good/cruel riff mocking @Reince45 in WH staff meetings.
"No leaks guuuys" she said, mimicking him in a dopey voice. "Seriously" 5/

"He should just be honest: 'I'm upset because there's someone working on a story who pronounces it RAYNSE instead of REINCE.'" 6/

Assuming you trust the veracity of this―and again, the details of the conversation were confirmed by Politico via two other sources―this is also a notable image. According to the account, this “expression was telling,” as Conway was discussing the events of the past several weeks.

Before some WaPo folks joined her, she was talking about recent weeks in the WH to some other party guests. This expression was telling. 7/ pic.twitter.com/pR8KIuZSsF

The news that one of the most recognizable public faces of the Trump administration is leaking and joking it up at D.C. functions, whether on or off the record, complicates the White House’s recent messaging efforts.

In the aftermath of the explosive testimony of Comey, who accused the president under oath of lying and testified he believed he was fired over the ongoing Trump-Russia investigation, Trump himself has attempted to reframe the scandal as being about leakers. In fact, he accused Comey of being a leaker during a tense, somewhat cryptic press conference on Friday (and again on Twitter on Sunday morning) at the same time as he claimed he was “100 percent” willing to testify under oath.

Now, however relatively mild the information Conway let slip might be, she might not be immune from the “leaker” label. It just goes to show that when you’re a public advocate for one of the most controversial administrations in modern American history, people’s ears perk up when they see you glad-handing at parties.